#187--Another Brother Fighting for Freedom--John Richards 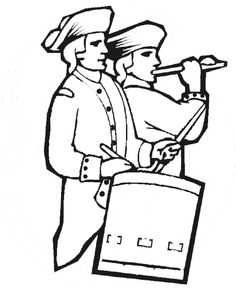 The Fourth of July is this week so when the theme was Independence I immediately though of those in my family who fought in the Revolutionary War.  I have previous blogged about my third and fourth grandfathers, Abiathar Richards, Sr. and Abiathar Richards, Jr. and their brother, Abel Richards—all who fought for freedom.  Now I am going to add another brother to that list, my uncle, John Richards.

John Richards was born in Dedham Massachusetts on March 19, 1723.  His parents were John and Abigail (Avery) Richards.  He married Rebecca Herring.  They had two sons and six daughters.

John’s service was fairly brief, but not unusually so.  Massachusetts Soldiers and Sailors in the Revolutionary War Indicated John was a private in William Ellis’s Company, Colonel Heath’s   He also served in a company commanded by David Fairbanks, Colonel McIntosh’s Regiment for 4 days at Dorchester Heights.  According to the website Boston’s Revolutionary War
Regiment which marched o
n the alarm of April 19, 1775 and served 9 days.

“In the evening of March 4, 1776, George Washington's army and local volunteers quietly fortified the summit of Dorchester Heights with cannon captured at Fort Ticonderoga. When the British army in Boston woke the next morning, they discovered that they were now surrounded. This action by the colonial militia hastened the decision by the British army to evacuate Boston nearly 2 weeks later.”


I would like to talk to John about his service.  Just what did he do?   Were any of his brothers or other relatives serving in the same units?  How hard was it to maneuver the cannon into place?