James Hannah is my fourth great grandfather and one of my immigrant ancestors.  Most of the information I have has come to me from other relatives with little in the way of documentation.  I do have two letters that were written to my grandfather in the early 1900’s talking about the family.  However, finding documentation to support those recollections has been a challenge.

James is said to have been born in Ireland, in either Deery or Downs, and I did find a James Hanna, who was born in Newry, Down about 1772.  Evidently Newry is on the border of the two counties so the location may be correct.  The name and the date would fit, but I have no idea that this James is the one I am looking for.  However, in those records, he is the only James Hannah.  This at least is a beginning.  One of the letters does refer to the fact that two of the writer;s cousins went to Ireland and met some of the Hannahs.  Unfortunately it does not give a place except for the statement that they owned “Hannah’s Bleaching Green.”

The first firm reference to James is in his father-in-law’s (Andrew McKee) application for a Revolution War pension.  It describes Andrew’s daughter, Nancy as marrying James Hanna in Pennsylvania, probably in Chester County, which is in eastern Pennsylvania.

Around 1800 James and his family moved to western Pennsylvania, first in Washington and then in Armstrong County.  In each location, James farmed.  Prior to 1830, he moved his family to Ohio.  According to a letter I have from a cousin, the family came down the Ohio River on a flatboat.

His sons settled in Brown County, near Georgetown and Ripley while he and his wife settled in Hamilton County.  I have not been able to locate where they lived.  James died 1828 and is buried somewhere within that county.  His wife, Nancy, returned to Brown County and lived in Lewis Township, near her sons.

Any ideas you have of how I could proceed, would be welcome.

If I could talk to James I would ask him questions that would fill in the blank spots.  Where were you born?  Who were your parents?  Why did you come to the United States? When did you and Nancy McKee marry?  Where are your buried?

#27 Jonathan Fairbanks—Building His Family a House 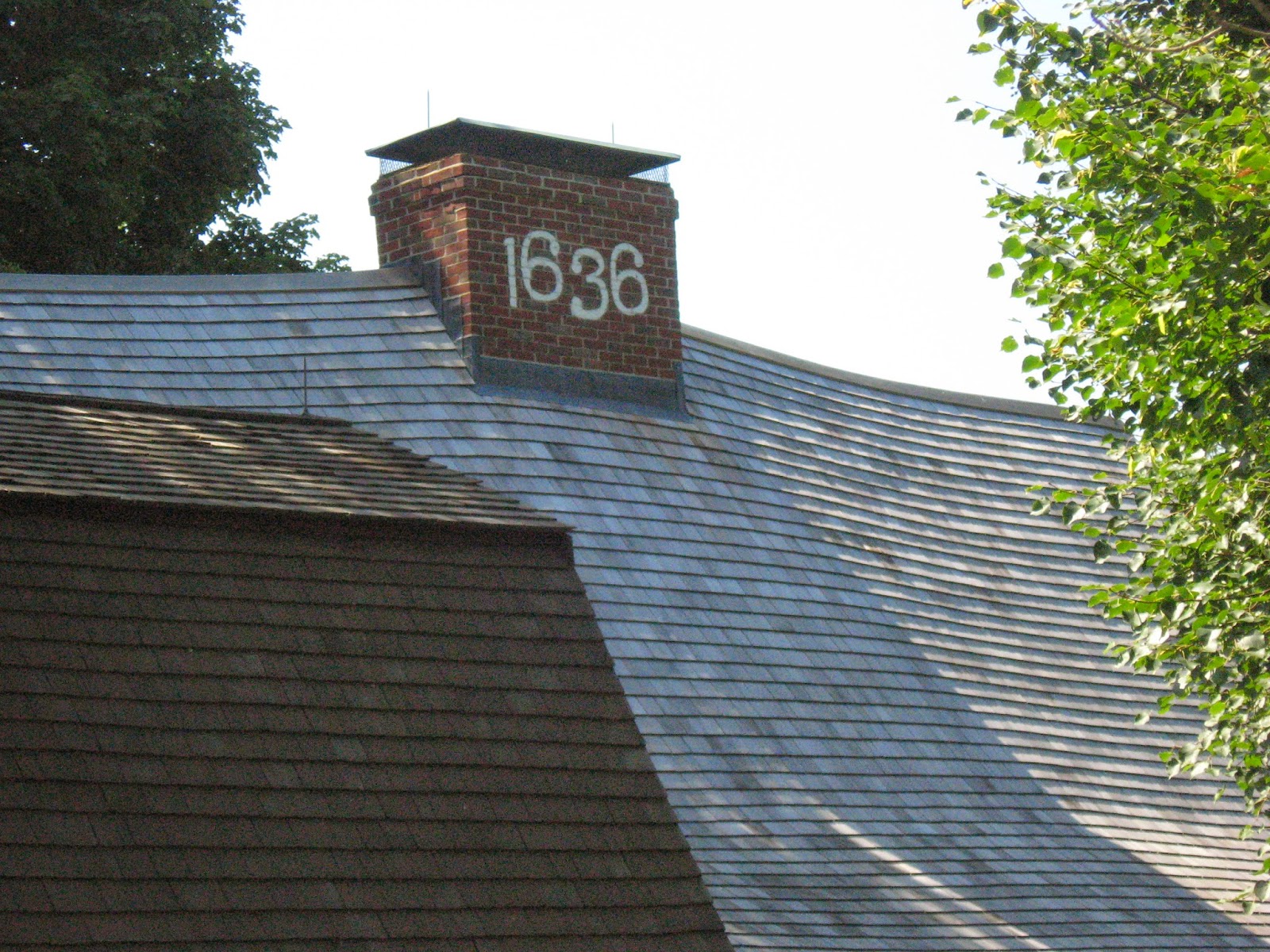 Any time I have an opportunity to visit a place that is in my genealogy, I try to do that.  So several years ago, when I was in Boston, I went out to Dedham on the MTA and bus to see the Fairbanks House.  The house is timber-framed and is the oldest such structure in the United States.   I wanted to see the house because Jonathan Fairbanks  (Fairebanke; Fayrbanks), the builder of the original structure,  is my  8th  great grandfather and one of my immigrant ancestors.

Jonathan was born in Sowerby in Yorkshire, England and came to Boston Massachusetts in 1633, probably in the Speedwell.  Accompanying him were his wife, Grace Smith (last name sometimes given as Lee) and their six children.  Until 1636 they lived in Boston, then they moved to Dedham.  In 1637 Jonathan signed the Dedham Covenant, was granted a house lot, and became a freeman on March 23, 1637.   In addition to his house lot, Jonathan was  granted land on many other occasions.

The house as it stands today was constructed over a long period of time to meet the changing needs of the family.  Sometime between 1636 and 1641 the first part of the house was built, probably on his original house lot.  This part of the house consisted of four rooms:  a great hall (kitchen) and a parlor on the first floor and two bedrooms on the second floor with storage space above.  The house was heated by three fireplaces, one of which was on the second floor.  While by out standards, the house sounds small for eight people, for its time, it would have been considered quite comfortable.  Supposedly an addition on the west end of the house was added sometime in the early 1650’s for John Fairbanks and his new bride.  Other additions to the east and west ends of the house were made in the late 1700’s. 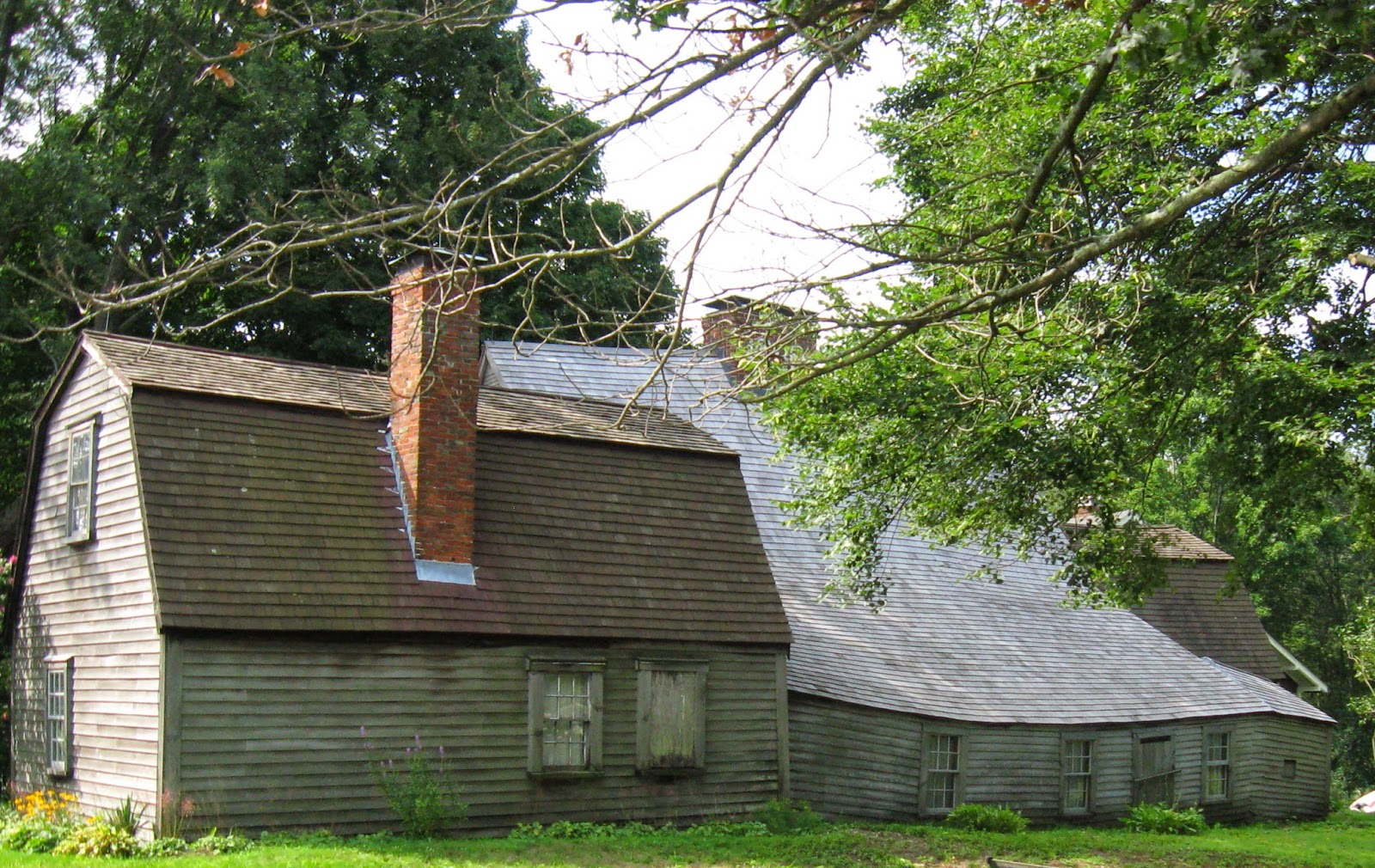 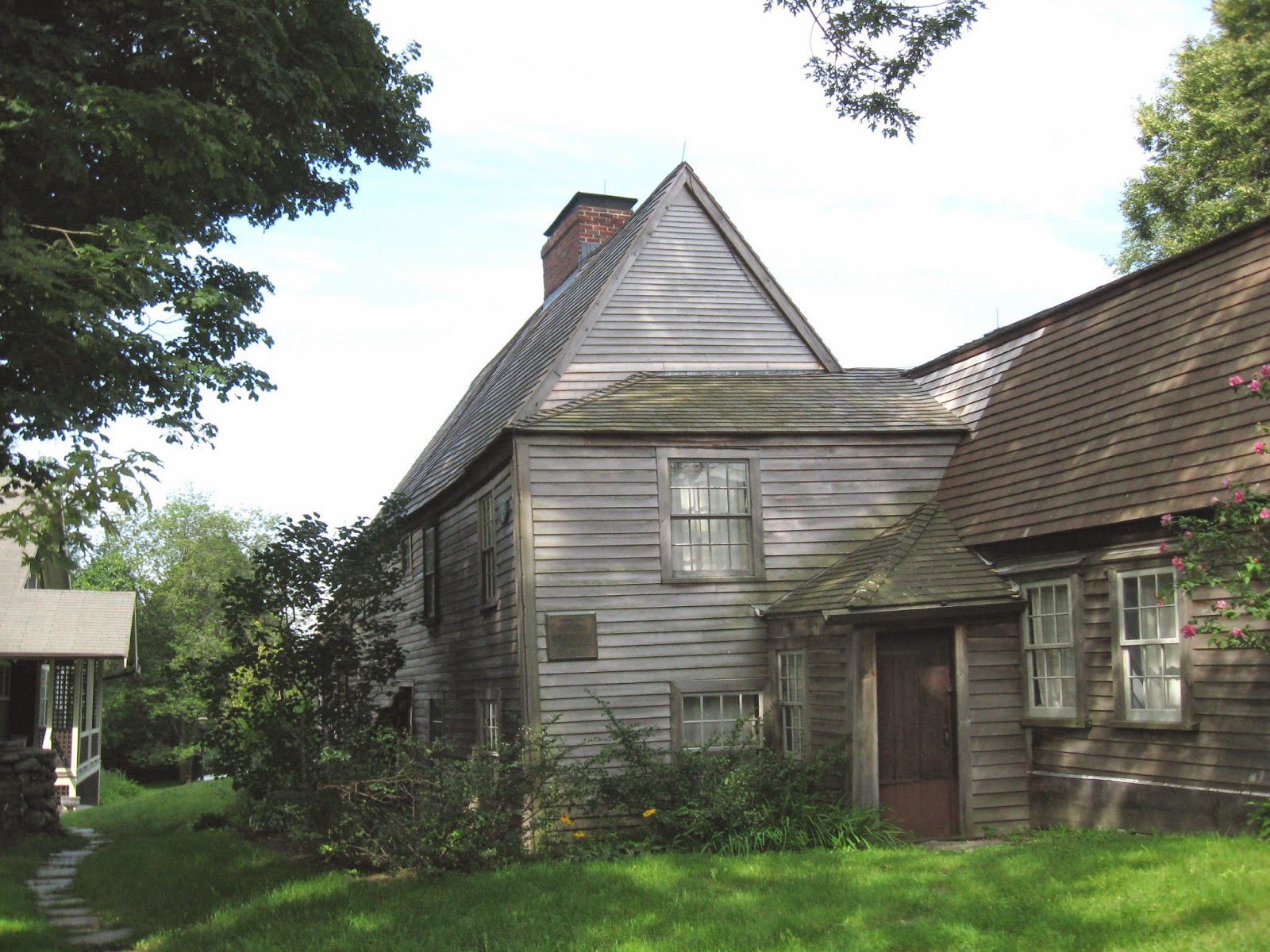 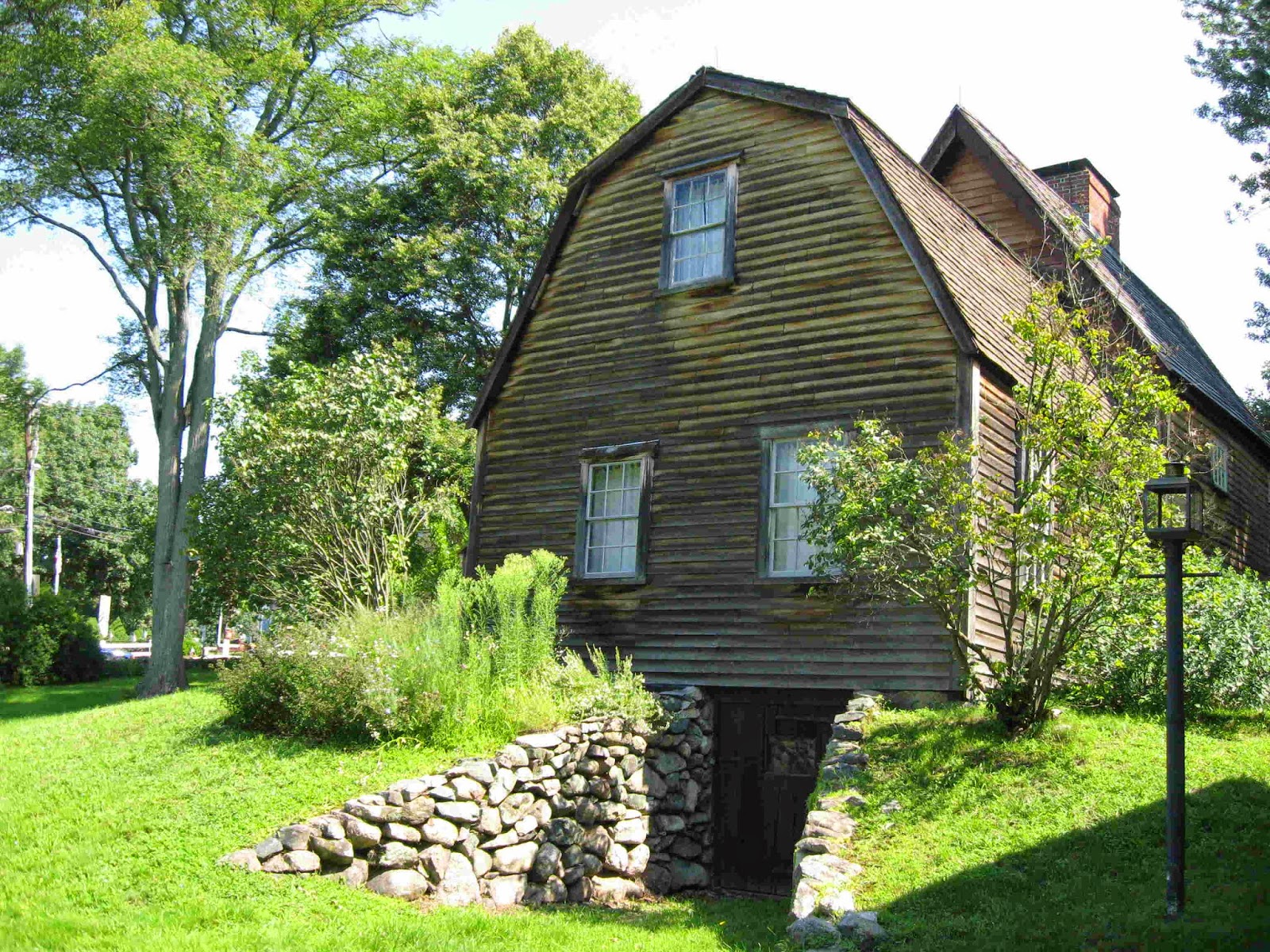 From the time it was first built until 1904, the house was passed down from generation to generation of Fairbanks.  So, it was continuously occupied by one of the Fairbanks for 268 years.  In 1904 the Fairbanks Family in America began to operate the house as a museum.

I had a wonderful tour of the house. My guide was extremely knowledgeable and able to explain the various parts of the house and the ways in which family members used them.  I had plenty of time to look at the different rooms and their furnishings.  Since the interior is rather dark and it was not a particularly sunny day, my guide used a flashlight to show me the darker corners.  You are not allowed to take pictures inside the house, but I was able to get a lot of shots of the exterior.   If you are in the Boston area, I highly recommend seeing the Fairbanks House; it will give you a real feel for the ways in which our ancestors lived.

I wonder what Jonathan Fairbanks would think about the house today and the fact that it has become a museum.  Of course, if I could, I would ask him. 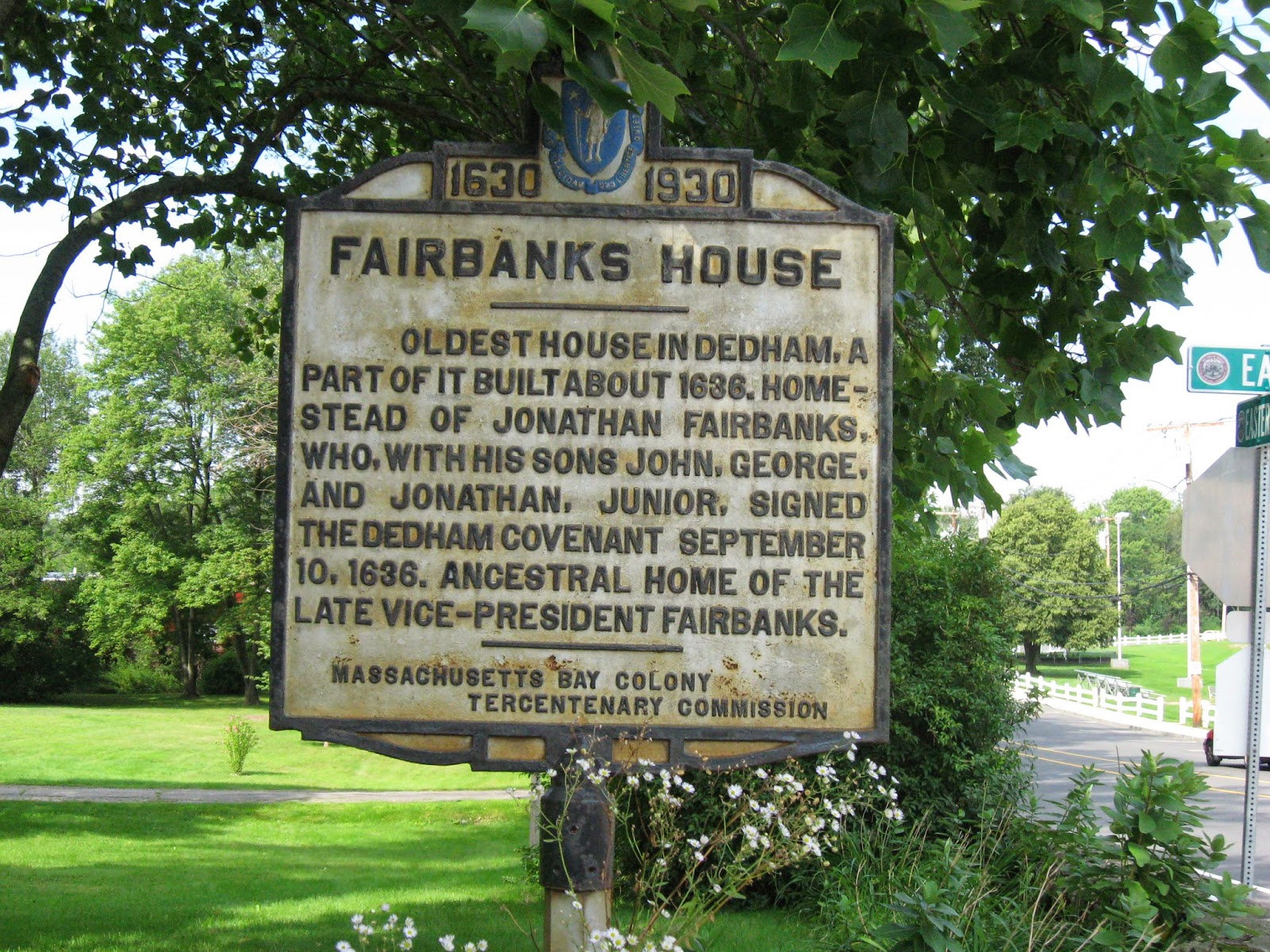 Email ThisBlogThis!Share to TwitterShare to FacebookShare to Pinterest
Labels: Fairbanks

#26 Albertine Hannah--Unique in Many Ways 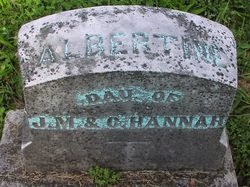 I am always interested in the females in my family tree, particularly if there is something rather unusual about them.  My great, great aunt, Albertine Hannah, falls into that category.  First of all, she has by today’s standards, a very, very unique name.   I do not know any one named Albertine, and I would bet that you do not, too.  A quick Google search indicated that Albertine means noble or bright, is the female form for Albert, and was a very popular in the mid to late 1800’s when Queen Victoria of England married Prince Albert.
Some of what I know about my great great aunt,  Albertine, comes from census date.  I know she was born in 1834 in Edgar County Illinois, near where Chrisman is today, was the seventh child of John M.  and Charity (Mears) Hannah, and lived on her father’s farm.  Her mother died in 1842 when Albertine was 8 years old.  In 1850 she was living with her father, her three brothers, and two sisters.  In 1860 Albertine was living with her father, and her niece, Charity Conrey, the daughter of her deceased sister, Nancy.  When the Civil War began, both her father and her brother, John Wesley, enlisted.  Her father fought for about three months, and then returned home, due to illness.  He died in 1865.
Several  years ago I went to Edgar County and did some research on The Hannah’s.  In the land records, I found several references to Albertine.  On March 12, 1856 for $1.00 her father sold Albertine 80 acres of land in Ross Township.  In addition, by a mortgage on December 14, 1861 her father also sold Albertine an undescribed piece of land.  What I find most interesting is that here is a woman in the mid 1800’s who owned land.  But she also sold some of her land.  In February of 1861, for $700 Albertine sold James R. Watson a portion of the land that she had bought from her father in 1856.
I also was able to obtain Albertine’s will.  Most notable is her request that her real estate be sold and that $1200 of the proceeds be used to purchase a lot in the cemetery in Paris Illinois and to erect a monument for her father, mother, sister Mary, and herself.  The remainder of the money from her real estate and her personal property was to be divided between her brothers and sisters as well as her niece, Charity Conrey.
Albertine died in 1867.  Her wishes were carried out.  There is indeed a Hannah plot in the cemetery in Paris, Illinois.  There is a large obelisk with her father’s name on the bottom, and headstones for Albertine, her sister Mary, and her sister Catherine Hannah O’Hair.  For reasons that I do not know, the headstone for her mother is in the McKee cemetery. 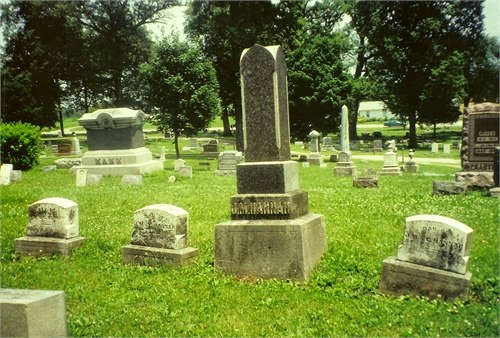 I would love to be able to have a conversation with Albertine.  I would like to know what she did with the land she owned.  Did she rent it out for farming?  Did she hire people to farm it?  Did she just keep it?  Why did she sell it?  I also would like to know why she remained single.  Did she, like many women of that time, have a man she loved who was killed in the Civil War?  Also during the Civil War, who ran the farm while her father was at war?  Did she?  Did her brother, George, or her brothers-in-law help out?