What is your favorite place to research and who was from there is the theme for this week's blog.  A couple of weeks ago, I blogged about one of my favorite places--Butler, Missouri and John W. Hannah so I needed to pick another place.  After some thought, I decided that Dedham, Massachusetts would be a good choice.  I have visited Dedham, done a considerable amout of research about it, and have many ties to that area.  My immigrant ancestor, Edward Richards, was from Dedham and arrived there in 1636.  My Richards line remained in Dedham from then until about 1890.  Not only am I related to the Richards, I also have ties to the Newells, Huntings, Metcalfs, Fairbanks, Smiths, Fullers, and Fishers and several other families,  I discovered that it is a pleasure to research my Dedham ancestors as the town records are fairly complete and readily available.  As I have said to other genealogists, ""Those Puritans wrote everything down."  So I know that Edward Richards was a selectman and picked to represent the town in Court, but also fined for not inspecting the fences.

Dedham was established in 1636 when the citizens of both Cambridge and Watertown, Massachusetts decided to establish two other plantations, one in Dedham, the other in Hartford, Connecticut.  The General Court granted the original petitioners of Dedham 200 square miles of land south and west of Boston.  The intent of these Puritans was to establish a Christian community, where its citizens would live by the Golden Rule, where differences between people would be settled by mediation, where citizens would donate time to maintain the community, and where town rules and policies would be followed.  Their intention were contained in a document known as the Dedham Covenant.  Those desiring to settle in Dedham need to be acceptable to the prior signers of the Covenant and were required to sign the covenant. 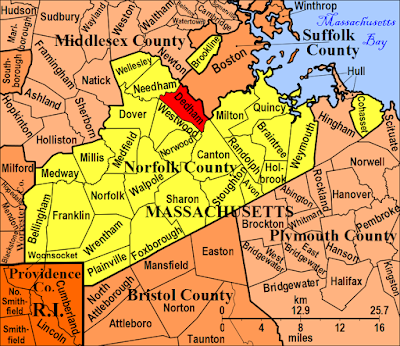 
Twice I was able to visit Dedham.  So here are some of the highlights of those trips.

The bus left me off on High Street, which is the town's main street.

I quickly walked down the street to the Dedham Historical Society and Museum.    While I was there, I did some research on my Richards ancestors, looked at the exhibit of Dedham Pottery, and visited the Museum.

I also saw the Allin Congregational Church, which was established in 1637.

Many of my ancestors are buried in The Village Cemetery.  So I had to go there.  I spent time looking at the Richards headstones and taking pictures of them.


About 10 minutes from the town center is the Fairbanks House.  My 8th great grandfather, Jonathan Fairbanks  built this house in 1637.  It is the oldest standing timber –frame house in North America. I walked over to it and had a wonderful tour.   For more information about the house see #27--Jonathan Fairbanks--Building his Family a House


Our theme for this week is an ancestor who had a large family or who was a member of a large family.  So I decided to blog about Ebenezer Newell, my fourth great grandfather.  He had 13 children and in my book that certainly qualified as a large family. 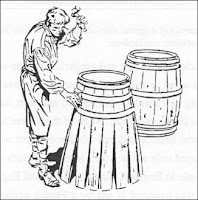 Ebenezer lived in Dover, Massachusetts and was active in the community and the church.  He served as one of the town wardens and selectmen, was on the committee on inspection and safety during the Revolutionary War (See #8 What Do You Mean, I Cannot Have a Cup of Tea?  Ebenezer Newel
l) and in 1773 was the sealer of the bread in 1773, making sure that the bread met certain standards.  He was a deacon of the church and charged with taking care of the town meeting house.  For that work, he received 12 shillings a year.  While Ebenezer farmed, at times he engaged in other additional occupations.  He was a cooper and at one time, he also ran a tavern.

Ebenezer died on  January 8, 1798 at the age of 87 and is buried in Needham Cemetery.  If I were able to talk to him, I would ask him what it was like to have 13 children, if he had any advice for how to successfully raise children, if any of his children caused him problems, and if he was especially proud of any of them and their accomplishments. 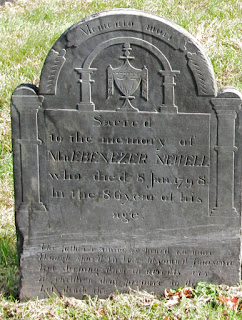 I came across a new presentation program called Sway, which is part of Microsoft. I thought it might have some use in my blog and for this week I have tried it out.  Here is the link:  Returning to the Past.   Please let me know what you think of this format.
Posted by Mary at 6:25 AM 1 comment: