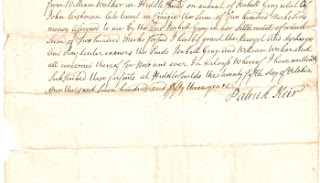 I have been analyzing and blogging about the estate papers of James Hannah. Most of the papers seemed pretty routine to me.  Bills from various people; for example, $10 from the attorney.   However, there were two that caught my attention.  They were from his sons, William and John and each was an accounting of the value of what each had done for his father and what he had done for them.  This week I am blogging about William, and next week will cover John. 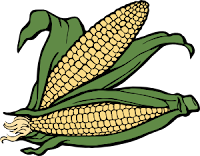 corn for $.37 ½ and a year later, a half bushel for $.12 ½.  The total due James from William was $23.93.  I was interested to know who Jonathan Moore was so I check the History of Brown County, Ohio.  Jonathan Moore was an early settler in Brown County and the first to possess a team.  I cannot determine how he was related to Rachel Moore, William’s wife, but I suspect they were related. 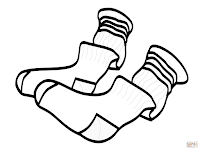 If I could talk to both of them, I certainly would have some questions.   I am not sure what the assistance from James to William is all about, but I would guess that it was to help William get started in life.  William was about 22 at the time of the first assistance, recently married and with his first child.  From what I have read, corn was one of the primary crops in Brown County at that time.  However, to grow the corn, the land would need to be cleared.  So I would ask about that.  I am more
puzzled about the clothing that William supplied to his father.  James’s wife was still alive, and I would presume that she was able to make clothes.  I would like to know who made them and why.  The cutting of the briars and honey makes sense to me.  James was getting older, and that is hard work.  So I would ask if that is correct.

Last week I blogged about how I found James Hannah’s estate papers in Brown County, Ohio.  In those papers are an inventory of his possessions along with the accounting of the auctions where they were sold.  Very often what a person owns will tell you about the person.  That was true of James.

I was pretty sure that like most people living in Brown County in the early 1800’s, James farmed.  That proved to be true.  According to his inventory, he owned both farm animals and equipment.  Listed were 1 mare, 1 colt, 2 cows, 2 calves, 1 heifer, and 11 sheep.  Equipment included 1 hoe, 1 scythe, 1 mattock, 1 axe handle, 1 hay fork, 2 ploughs, 1 shovel, 1 log chain, 2 augers, 1 saddle and 2 sets of horse gear, and 1 tree and cloves.  Not being familiar with farm equipment, I learned that a mattock is a combination of an axe and adz and a tree and cloves is used to hitch horses to a plough or wagon.

I was surprised by the loom, reeds and spools.  They are used for weaving and it makes me wonder if James in addition to farming did some weaving. I think if his wife was the weaver, they would not have been sold.  It is indeed possible that James was a weaver.  A letter I have (and I have learned not to trust the information too much) says that James’s family in Ireland were weavers and ran Hannah’s Bleaching Green.   Another mystery to be solved.

If I were able to talk to James, I would certainly ask him about the looms, etc. and if he used them.  I would also like to know what crops he grew.

#101--James Hannah—Looking for James in All the Wrong Places 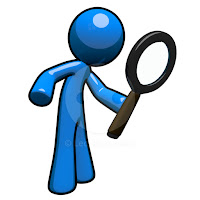 James Hannah is my 4th great grandfather.  For all my direct line ancestors, I like to have documentation of their births, marriages, and deaths.  While I have been pretty successful in doing that, I have not been able to find any documentation about James’s death.  I did, however, have a clue—a letter written in 1929 describing how when James Hannah came down the Ohio River from western Pennsylvania, he settled in Cincinnati.  Then when he died, the writer’s grandfather went to Cincinnati and brought James’s wife Nancy back to their home in Brown County, Ohio.  So when I was looking for documentation, I looked at death and cemetery records for Hamilton County and Cincinnati with no success.

Last year I found a book entitled Brown County Court Records, 1818-1850 by Patricia Donaldson.  Most of the book listed those who died with a will, but in the back there was a listing of those who died intestate.  As I checked to see if there were any Hannahs listed, I was both surprised and delighted to find James Hannah.  The date of his death fit and the administrator, Joseph Mckee, made sense as Joseph was his son-in-law.

Last month I contacted the Probate Court in Brown County and was able to get all the documents in James’s file.  Once I looked at them, I knew that I had the correct James Hannah.  I learned a couple of lessons from this.  One is that no matter how convincing a memory of event is, the event may not be true.  In this case, I suspect the writer was thinking of another grandparent.  Second, when you cannot find a record, look in nearby counties.  Had I done that, I would have found those estate documents much sooner.

Right now I am trying to make sense of about 50 pages of bills, receipts, inventories, etc.  Stay tuned for an analysis.
Posted by Mary at 12:38 PM No comments: