The Fourth of July always reminds me of the fight for independence and the Revolutionary War.  So for this week, I decided that I would blog about an ancestor who fought in that war and whom I did not know much about.  I have previously blogged about Abiathar Richards, Sr. and Abiathar Richards, Jr.—my grandfathers, who fought, so I needed to find someone else.  I did not take long for me to find Abel Richards, the younger brother of Abiathar, Sr. 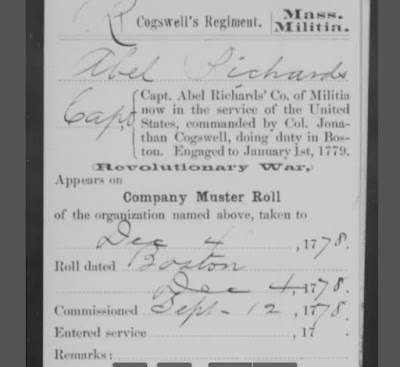 Abel was listed in the Massachusetts Soldiers and Sailors in the Revolutionary War on Ancestry and as a Daughters of the Revolutionary War patriot.  Those are very brief summaries of his service.  He served for nine days as a private in Captain Ellis Company on the Lexington Alarm on April 19, 1775 and served 2 more days at the same time with Captain David Fairbanks.  In addition, he served 4 days at Dorchester Heights, when the company marched to Roxbury in March of 1776.  In June 1776, he was commissioned a Captain of the 6th Company, 1st Suffolk Regiment; he served 1 month and 7 days on a “secret” expedition to Rhode Island.  Two years later, in March, 1778, he captained a company in Col McIntosh’s regiment, and served until April 19, 1778 at Roxbury and Boston. 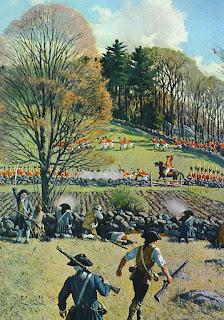 I always find those summaries both helpful and frustrating.  Helpful because you get information and frustrating, because there is not much information.  So I was pleased to find out that Fold3.org had made its Revolutionary Wary files searchable for free from July 1 to the 15.  Looking for any information on Abel, I found that his wife, Mary, had applied for a widow’s pension and that in the pension file, were several affidavits about his service from men that had served with him.  The one I found most helpful was the one which shed some light on that secret mission.  Joshua Whiting stated “Captain Abel Richards raised or mustered a company of soldiers of nearly 100 men and marched from said Dedham by way of Taunton to Tiverton or Little Compton,in the State of Rhode Island, and and in this expedition did perform military service five or six weeks and were then discharged and returned to Dedham…”  From that description, I am not sure why it was described as "secret."

Abel was born in Dedham, Massachusetts in 1738.  His parents were John and Abigail (Avery) Richards.  In 1764 Abel married Hannah Newell and with her had five children.  After her death in 1794, Abel married Mary White. Abel died on January 18, 1832 at the age of 94 and was buried Westwod Cemetery in Westwood.Massachusetts.

As always, I would have some questions for Abel Richards.  First, I would like to know about that “secret” mission, which when Joshua Whiting described it.  Just what did they do?  Why did Whiting think it was "secret"?  I also would like a first-hand account of his participation in the Lexington Alarm—how did he hear about the British coming?  How did he get there?  Who else went?