On June 27, 1854 my great grandparents, Joseph and Regina (Wendel) Minarzick (now spelled Minarcik) , and their two children, and my great, great grandparents, John and Katherine (Kolh) Wendel and four of their children arrive in New York City on the ship William Tell.  As did most German immigrants, they lived in the tenements on the lower East Side, which was also known as Kleindeutschland (Little Germany).   Germans coming to New York clustered together in a 400 block area of Manhattan from Division Street up to 14th street and from the Bowery to Avenue D.  From what I have read, they brought much of their German culture with them.  There were beergartens and saloons, German language newspapers, social clubs, shooting clubs, singing societies, banks, libraries, theaters, etc.  So when I was in New York with the New English Historical and Genealogical Society, I was excited to be able to visit the Tenement Museum at 97 Orchard Street and learn what life might have been like for them.

The Tenement Museum has several tours.  We took the one that focused on the German saloon run by John and Caroline Schneider.  The saloon was in the front of the house on the first floor and the Schneiders lived behind it.  I thought it was particularly interesting that in 1880 there were 346
saloons in Kleindeutschland and wondered which ones my ancestors went to.   I was surprised at the number of places to drink, but learned it was not that the Germans drank that much, but rather that the apartments in the tenements were so small that having company over was very difficult.  So people met their friends in the bars and saloons.

In the early 1850’s, well-to-do individuals who owned homes in the area were moving north.  Their homes were then subdivided into apartments.  In some cases additional floors were added to the original house so that these houses, known as tenements, would be four or five stores high.  The typical tenement house was 100 feet long and 25 feet wide.  Tenements originally had no gas for heating or any lighting; the only light came from the windows in the front and back of the building.  However, in 1901 city regulations required electric lighting in the hallways.  The bathroom and water were located out back behind the tenement.  Typically, each floor contained 4 apartments with each apartment consisting of a kitchen, parlor, and bedroom.  However, there were larger apartments available
to those with more income.

Given that information, I wondered where they lived in New York.  The 1860 census provided some basic information:  both families lived in the 17th Ward, 5th Division.  In fact, they are listed on the same census page.  The Wendels were in Dwelling Number 22 along with four other families.  The Minarciks were in Dwelling Number 23, with four other families.  Given the Dwelling Numbers, I assume that the houses were next door to each other; if not they were certainly close.  In 1870 they were still in the 17th Ward, but in the 22 District.  The Minarciks were in Dwelling Number 177 with 6 families.  The Wendels—Just John and his daughter, Elizabeth-- in in Dwelling Number 194 with 12 families.  One family moved, but I do not know which one.  Prior to the 1880 census, Joseph Minarcik and his wife died.  That left Charles, their oldest son as the head of the family, living with his four brothers and sisters and in the same house as the Wendels—both at 67 Willett Street, New York.  When I tried to find Willett Street on a map of New York City, I discovered that the street no longer existed, but had been replaced by the Samuel Gompers Housing project.  That project is north
of Delancy Street on Pitt Street.  So at least I know the general area.  With a little more digging on line, I found an 1869 map of the area with Willett Street and all the houses on Willett on it.

I would like to ask the Wendels and the Minarciks about their life in the Lower East Side Kleindeutschland.  How did they pick their apartments?  What were their neighbors like?  Why did they move?  How much was the rent?  How did they manage in the cold of winter and the heat of summer?  What did they do for entertainment?

#91--The Eitelbachs at Ellis Island


When I was in New York City in May, we visited Ellis Island.  There are several different tours.  We took the one the focused on the experience of being an immigrant coming to New York.  I was particularly interested in doing that one because my great grandparents, Louis and Marie (Huelster) Eitelbach came through Ellis Island on May 1895 with four of their children, Walter, Louis, Maximillian and John.  That visit inspired me to further research their experience. 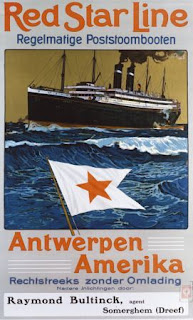 When I thought of them coming to American, I always thought their arrival.  So I decided that my research need to begin with their leaving Germany.  If they followed the typical pattern of immigrants, Louis Eitelbach contracted with a local steamship agent, who made the arrangements for their immigration.  That would have included transportation to the port, a hotel room while waiting for the ship to sail, if necessary, and passage on the steamship.  Many Germans left through Bremerhaven or Cuxhaven (Hamburg).  However, that was not true for the Eitelbachs.  They sailed from Antwerp,
on the Red Star line ship, the Rhylander.  Why Antwerp?  It was the port that was closest to Barmen, where they lived.  Before they were able to board the ship, they would have had to pass a medical examination and answer a series of questions.  That process insured that they were fit to enter the United States.  If the immigration authorities at Ellis Island denied anyone entrance, the steamship company had to take them back to Europe at the steamship company’s expense.

In the family that keeps sentimental things, I have my grandfather’s ticket locked in my safety deposit box. I cannot find when they departed, but I know from the passenger list that they arrived on May 23, 1895.  According to the Red Star Line’s webpage, the voyage took from 7 to 10 days, depending on the weather.  Looking at the passenger list, I learned that they came third class or steerage, their quarters were in the stern of the ship and they brought 5 pieces of luggage with them.  I also saw that Louis described himself as a locksmith.


Once the ship arrived in New York, the Eitelbachs would have been taken by ferry to Ellis Island. The ferry was divided into sections and the letter they were given, told them which section to stand in.  Once at Ellis Island, they would have been directed to the main building.  Right inside the door was the baggage room, where they would have had to have left their five bags.  They, then, proceeded up the stairs to the Registration Room, also known as the Great Hall.  The Hall was divided into lines by railings.  Given the size of the room—200 feet long and 102 feet wide—and the very large number of people in it, all speaking different languages, the noise may have been overwhelming, especially for the two youngest boys, Max and John.

In the Great Hall, the Eitelbachs would have been quickly been examined by a doctor to determine if they were healthy enough to enter the United States.  Had the doctor had any suspicions that they
were not, they would have been sent for a more in-depth exam.

Next was the legal inspection.  A registration clerk, who had the ship’s manifest in front of him, would ask the same questions of each person e.g. name, age, occupation, destination, amount of money, the name of a friend or relative, etc. that they were asked when leaving Antwerp,  That was to determine if any answers were different.   I am pretty sure my great grandfather and great grandmother each answered the questions.  I do not know whether or not the children were questioned.  Since they entered the United States, I can assume that their answers were satisfactory. Once cleared, they would have gone back downstairs, claimed their baggage and probably met by a relative.  I do not believe that Louis Eitelbach had any relatives in New York.  However, Maria’s two brothers, Frank and Joseph, had both emigrated in 1893 and well could have been there to meet them.

I regret that I never talked with my grandfather about his coming to the United States.  I would love to know why they came, what the trip was like, what was their experience in going through Ellis Island, and who met them.

Lots of folks liked the drawing and the couple of poems that were in last week’s blog about my grandmother’s autograph book.  So for this week, I thought I would post a couple of more pages from that book.

I believe that most of the young women who signed this book were her classmates at Packer Collegiate Institute.  When I read the curriculum for the school at that time, the catalog stated that there were classes in line drawing.  Evidently some girls were really good at that as witnessed by this two pictures that were drawn. 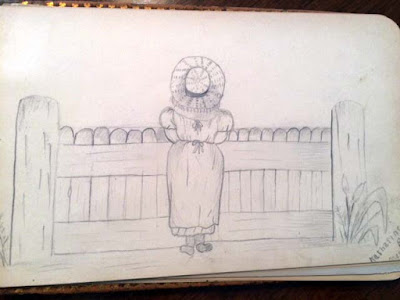 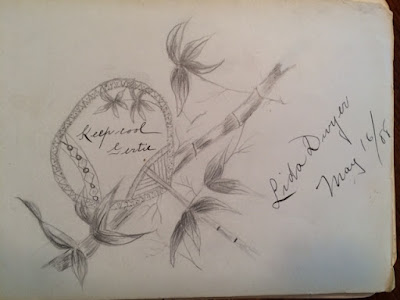 I liked the girl standing by the fence, but I think the fan with the instruction to “Keep Cool” was really quite clever.


Several of the little poems provided advice for life. 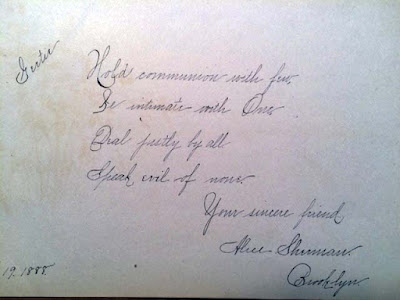 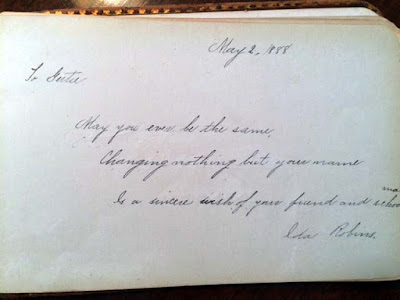 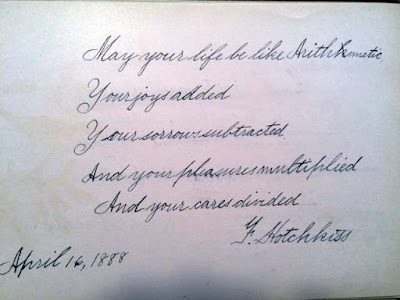 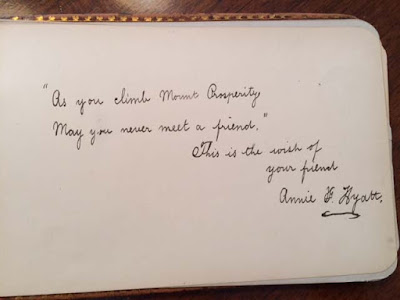 This last one confused me so I googled it and found that it is very similar to a quotation from Mark Twain.

And of course, there is always one which is just amusing. 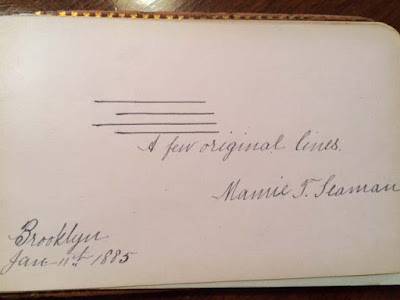 I would so love to know more about who these girls were and how they knew my grandmother.  Classmate?  Neighbor?