I have a couple of letters that were written in the 1920’s to my Aunt Tim about the Hannah family. In part, they contain genealogies, but they also contain recollections about people and events.  I have always wondered how accurate some of those recollections were.  Now that I have a good deal of information, I decided to “fact check” the letters against what else I have.  One of the letters is from Phillip Emsinger Hannah.  He was born in 1860 in Edgar County and aside from a short time in Oklahoma, lived there his entire life.  Consequently, he should have some knowledge of the Hannah family.

He talks about remembering my Aunt Tim’s grandfather, John M. Hannah and added that he died at his daughter, Albertine’s, house.  I found it very interesting that Albertine as a single woman in 1860 owned her own house.  I would love to know where it was.  He also mentions that there were three John Hannah’s from Edgar County that fought in the Civil War—John M. Hannah, John Wesley Hannah (Aunt Tim’s father), and John Bayard Hannah, a cousin to John Wesley.  He is indeed correct about that—John M. served a couple of months with the 72 Illinois Infantry, John Wesley with the 62 Illinois and John Bayard with the 54th Illinois.  I knew about the first two, but not John Bayard.

Phillip then writes about where people are buried.  He is correct that John M. Hannah, Albertine Hannah and Kate Hannah O’Hair are buried in the cemetery in Paris.  I have been to that grave site. He goes on to say that her grandmother (Charity Mears Hannah), Aunt Sarah Hannah Mitchell and Aunt Jane Riley are all buried in county burying grounds.  This is a little puzzling. Charity Mears
Hannah is buried in the McKee or Hill McKee Cemetery in Chrisman, Edgar County.  I have not been there, but there is a picture of Charity Mears Hannah’s grave online.  It is located in a very overgrown, rural area.  I suspect at some point it was part of some one’s farm.  It is indeed possible that both Sarah and Jane are also buried there and the stones are not readable.  Also puzzling is the identity of Jane Riley—there is a Rebecca Jane Riley, and Elizabeth Hannah Riley, her mother.  I am not sure but I think he meant Elizabeth Riley, as Rebecca married a man named Thompson.  He also writes that his grandmother Hannah (Nancy McKee) married Jacob Jones, moved to Illinois and is buried somewhere he cannot locate.  That is partly correct.  Nancy McKee Hannah did indeed move to Illinois, but she moved with her son, John M. Hannah, then, she met Jacob Jones and married him. Her grave is located in the Mt. Carmel Cemetery in Edgar County, and describes her as the wife of first John M. Hannah and then Jacob Jones.

He also mentions that the Hannah family was from Ireland and ran a linen bleaching green.  He then adds that his half-brother, Sam Hannah, visited them, but did not get much information about the family.  That is so frustrating, but does provide some clues to explore.  He adds, what I consider a nice “story” that James Hannah in Ireland came from a wealthy family, fell in love with one of the maids, which enraged his parents.  So he sold himself for passage to Philadelphia.
All in all, most of what he told my Aunt was correct.
Posted by Mary at 7:52 AM No comments:

This week’s theme is living a long life.  People in my family tend to live a long time so I had a number of ancestors to pick from.  Plenty of my ancestors lived into their seventies or eighties so I began to look for people who lived longer than that.  So I want you to meet Maria Huelster, my great grandmother, my Oma.

Oma was born in Schmallenberg, Germany in February of 1865, one of four children of Johann and Maria Franciska Monig. In 1885, she married Louis Eitelbach.  They lived in Hagen, Germany until 1896 when they, along with their four youngest children—Walter, Louis, Maxmillian and William—came to the United States.  They settled in Brooklyn, New York at 1287 Greene Street.  After their arrival, Maria had two more children—Harry and Frank.  I often wonder how she managed six boys.  I do know one thing--My mother told me that when they were small, on Sundays, before they went to church, she would dress each one and sit him on the sofa with directions not to move until they were all ready and dressed. Then, they would go to church.  Maria’s husband, Louis, died in 1927 and after that she lived on her own.  In fact, she lived alone in her apartment until very shortly before she died.

I do have some memories of Oma.  This is how I remember she looked.   I also remember that we  would go to visit her several times a year.  I do not remember much about those visits as I was rather young.  I do recall that she liked to speak German with my parents.  Her English was perfectly fine, but since both my parents had studied German in school, I think it was fun for all of them.  Oma also would come to visit us.  Here is a picture of her holding me when I was about two years old.
Every Christmas Oma would come and spent Christmas Eve with us.  We always sang Christmas carols that night and Oma would sing Silent Night and O Tannenbaum in German for us.


Oma died on November 3, 1958.  She was survived by her four sons—Walter, Louis, Harry and Frank as well as 13 grandchildren and 20 great grandchildren.  If my research is correct (and I believe it is), anyone in the United States who has the last name of Eitelbach is a descendent of Maria Huelster and Louis Eitelbach.  So if you are an Eitelbach, please contact me.  I would love to meet you.

#53 Eitelbach--So Many Ways to Spell it Wrong 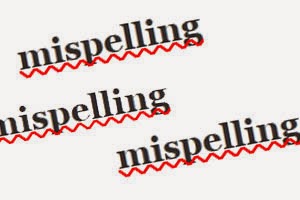 I love my mother dearly, but her paternal and maternal lines have led me a merry chase because they were spelled (or misspelled) in a number of different ways.   I have written before of the difficulties I had researching the Minarcik’s, my mother’s maternal line as the last name was spelled a couple of different ways---( See #6  How Do You Spell That Name?   Joseph Munarzik).  That problem pales in comparison to the trouble I have had with her paternal line—Eitelbach.

My greatgrandfather, Louis Eitelbach came to New York from Germany in 1896.  So naturally I looked for him and his family in the census records.  Louis along with his six sons and wife appear with no problem in the 1900 census on Greene Avenue in Brooklyn.  His son, Walter, my grandfather married Regina Minarcik in 1908 so I looked for them in the 1910 census.   When I searched on Ancestry, they did not appear.  So I needed to get a little more creative.  When I tried searching using Walter with a birth date of 1886 in Germany and a wife named Regina, up came the Citelbachs on Ridgewood Avenue, in Brooklyn.  I used the same technique on the 1920 census when Eitelbach did not work.  This time they were listed as Latelbath on 86th Street, in Woodhave, Queens.  The 1930 census was close enough to come up in a routine search as Eitelback at the same address as 1920.  My search for them in the 1940 census did find them.  I knew they were at the same address in 1940 so this time I searched for the family that lived next door as I knew that they had been neighbors for a long time.  This time they were listed as the Estelbachs.  Interestingly, in each of the New York 1915 and 1925 census, the name is spelled correctly.

Since the Eitelbachs were from Germany, I thought it would be interesting to see how the name was spelled in the baptismal records there.  Using Family Search, I found the following variations—Eidelbach, Eydelbach, Eitelbeck, Eitelback, and Eytelbach.  Those were not variations from different parts of Germany, but from Koblenz, where they originally lived.

I would really like to ask my grandfather or grandmother if they spelled the name for the census takers.  I also would like to know how much difficulty they had with other people misspelling their last name. 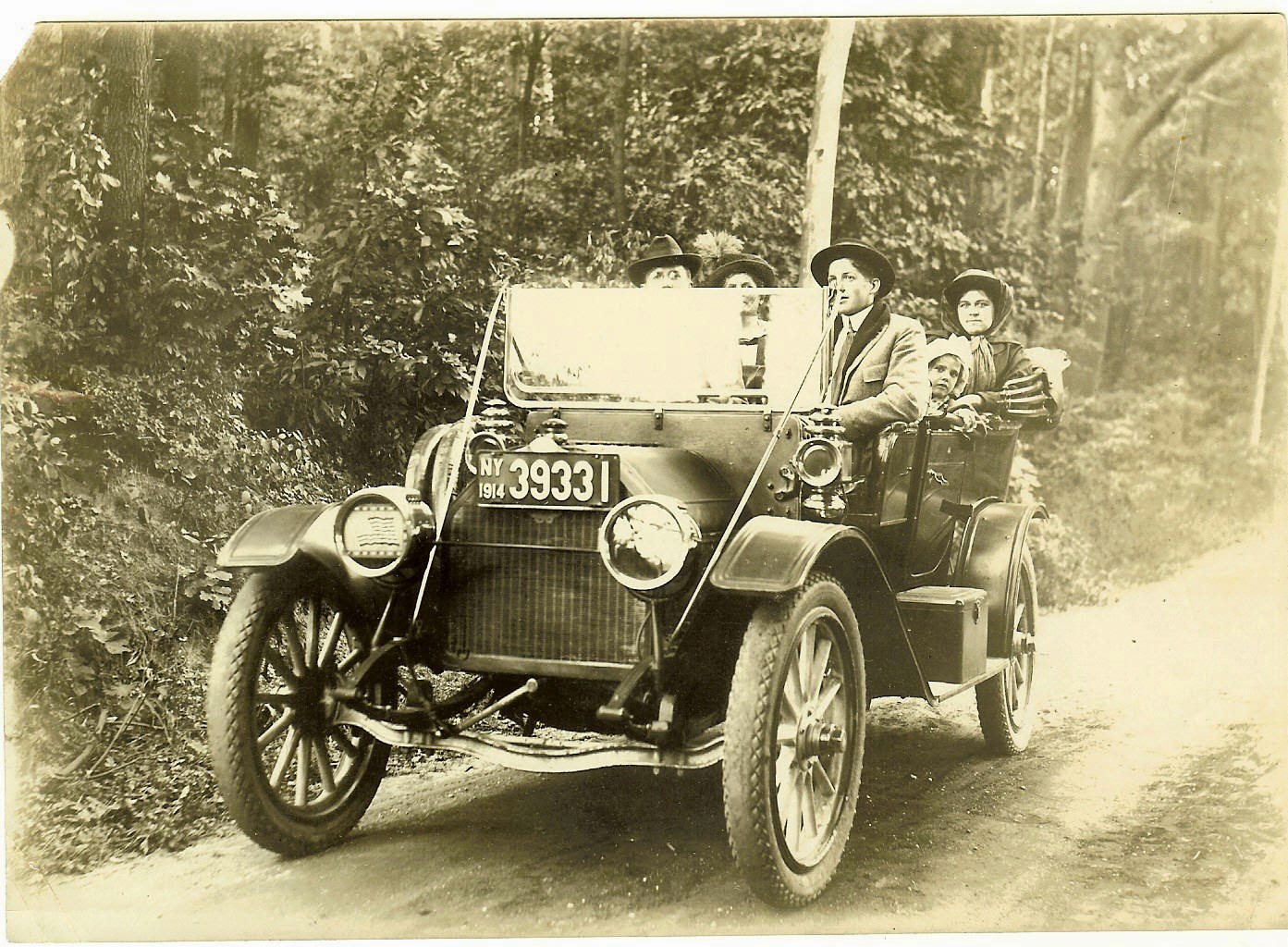 Those who know me or who have read this blog know that I really like old photographs.  I have used them in this blog several times ( #19 Gertrude Richards--Who Are These People?;   #15 Memorial Day—Honoring Andrew McKee) .  I have them from my mother’s family as well as from my father’s.  So when it came to picking my favorite photo, I had a lot to pick from.  I am not sure I actually have a favorite, because I like them for various reasons, e.g. good story, great place, interesting people, etc.

I have always liked this picture of my grandfather, Walter Eitelbach, taking his family for a drive, probably a Sunday drive.  The date on the license plate is 1914.  That is my grandfather at the wheel with my grandmother, Regina, behind him.  Peeking out from the back seat is my mother.  I do not know who the other man and woman are, but my best guess is that is one of his brothers.  Since my grandfather had five brothers, I do not know which one it is.

If I could talk to my grandfather, I would have a lot of questions?  Where were they going?  Did they go for a lot of rides?  What kind of car is that?  How much did it cost?  How did he learn to drive?  Also who took the picture?