With Valentine’s Day this coming weekend, I was reminded that I had some wonderful old Valentine postcards that were sent to my father in the early 1900’s.   I wondered about the history of Valentine’s Day cards, so it was off to the internet to do some research.   What did I find?  Briefly, beginning in the 1600’s it was not uncommon to give small gifts, poems, and notes expressing affection.   In the early 1800’s printed cards gained in popularity.  In England, cards were made out embossed paper and lace.  Having received one of those cards, Esther Howland in Worcester Massachusetts began printing similar cards in the United States.

While very fancy Valentine Day cards replete with real bird feathers, glass tokens, and dried flowers were popular during the Victorian Era, by 1900 printed Valentine postcards became popular. While the format may have changed the messages pretty much remained the same—sentimental expressions of affection.  I was interested to learn that recipients typically kept their cards, often putting them in albums.  I do have an album of cards collected by my mother, but the cards from my father’s family were kept in a box in the basement!

Here are a couple of the postcards that I particularly like: 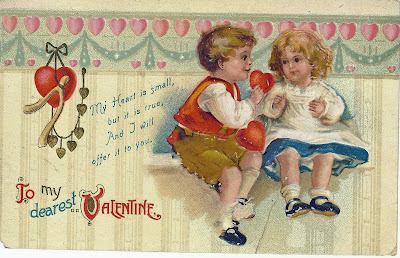 The verse reads "My heart is small, but it true,
And I will offer it to you"

It was send in 1911, when my father was 7 years old.  It came from Auburn, New York so I think it may have been sent by his cousins, the Rosses, who in their message ask if he has reached the stage of having a girl friend yet. 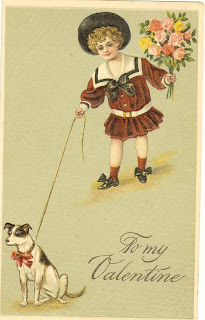 This next one came from Manchester, New Hampshire in 1910 from Nellie.  I have no idea who Nellie was, but she asked if he remembered her helping him send out Valentines last year and hopes he gets lots of them this year. 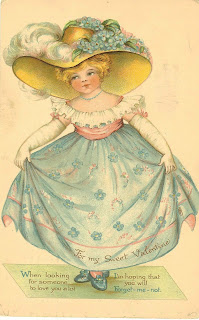 This last one was send without a message, but by the handwriting I am betting that it was send by his mother,  The message is
"When looking for someone to love you a lot,
I am hoping that you will forget me not"

If you like old postcards, you might want to look at my Pinterest Board:  Vintage Postcards.  I have lots of Valentine cards as well as card for most other holidays.