#169--At the Courthouse--Contesting a Will

Edward Richards, my seventh great grandfather and immigrant ancestor, came to the Massachusetts Bay Colony in about 1634, settle in Dedham, Massachusetts and signed the Dedham Covenant.  He married Susan Hunting.  Edward and Susan had four children:  Nathaniel, John, Sarah, and Mary.  Edward was active in the affairs of Dedham, and acquired a good deal of land.

Edward Richards died May 25, 1682, shortly after dictating his will but before signing it.  He left his wife room in this house, 12 pounds per year to be paid by their sons, Nathaniel and John, and the right to select 40 pounds worth of household goods.  His homestead, Broad Oaks, he left to his second son, Nathaniel, along with lots in Fowl Meadow and on Pond, Poweset, Birch and Great Plains.  To both Nathaniel and John he gave “The remainder of Mr. Cook’s farm.”  He left his daughter, Mary Richards Bullard, 15 pounds, if she was a widow otherwise her husband, Nathaniel, was to receive 5 pounds plus what he had already given him.  John Hearsey, husband of Sary Richards, received 40 pounds plus what he had already given him.  If his son, Nathaniel, was to send a college (“he brought up a son to learning”), Nathaniel should receive an additional 60 pounds toward the expenses.  Susan Hunting died several months after her husband on September 7, 1684.

Nathaniel and John were appointed administrators of Edward’s will.  They also divided Susan share (40 pounds in household goods) according to the custom of the times, two shares to John as the oldest son, and one share each to the other children.  Nathaniel Bullard and John Hearsy provided receipts 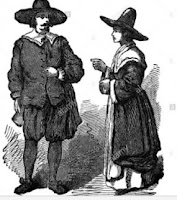 for their wives share.  Bullard and Hearsy filed a petition in the Suffolk County Court contesting the will based on their belief that their wives had been wronged.

“His daughters in their young time desired and with their parents free consent lived out at service
&…both married at about 18 yers of age…, but we both John and Nathaniel Richards seeing our father so destitute of help, willing with great care and labor lived with our father and carried on his whole business till we were each of us about 30 years of age before we married,”

The Court after hearing testimony, upheld the will.  Bullard and Hearsey appealed the decision to the Court of Assistants, but again failed to have the will set aside. 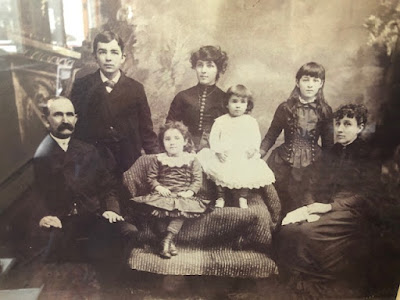 I love family pictures, whether they are old or new.  This pictures was given me by my cousin, Alice.  It is part of my gallery wall of family pictures.  From the size of the two young girls, I suspect it was taken about 1884 or 1885.  It a photograph of the family of Captain John Wesley Hannah from Butler, Missouri.


From left to right they are:
Capt. John Wesley Hannah—he moved to Butler, Missouri after the Civil War and built and ran the Palace Hotel.
William Hannah—moved to Auburn, New York and then Brooklyn, New York.  Started the W. D. Hannah Shoe Company
Marinda Hannah—Also known as “Toots,” married Edward DeArmond, who became a Brig. General I the United States Army.
Gertrude Hannah—Married and divorced Harlan Turner. Moved to Colorado, where she ran a boarding house for students at the Colorado School of Mines.
Cora Hannah--Also known as “Tim,” Married William Parke, an attorney, and lived in Brooklyn, New York
Anne Charlotte Hannah—Married Charles Ross and moved to Auburn, New York, where Charles was in the shoe business.
Jennie Sophia Hannah—she came to Butler to visit her brother, fell in love and married John Wesley Hannah. 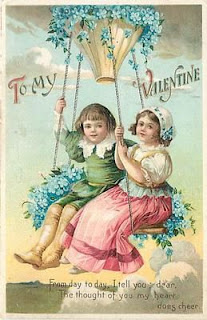 This week’s theme is love.  How appropriate for Valentine’s Day.  One way to express love on Valentine's Day is by sending cards.  I have some vintage postcards that were sent to my father when he was six or seven so I thought I would use them for this blog.


The first one is from a woman, named Nellie.  She wrote” 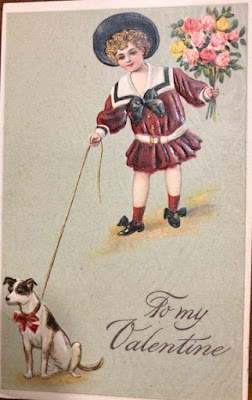 Dear Richards:  Do you remember a year ago when I was with you, helping you send note to all your Valentines? I hope you receive as may and much more this year. “ 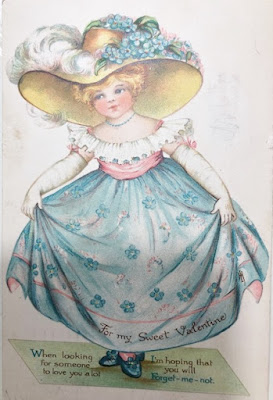 This one has no message but from the handwriting, I think it came from his mother.  At the bottom of the card it says:  “When looking for someone to love you a lot, I’m hoping you will Forget-me-not.” 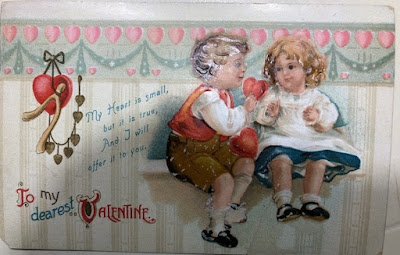 This last one is not signed, but came from Auburn, New York, so I think it might have been sent by one of his aunts, who lived there.  The rhyme on the card reads:  “My Heart is small, but it is true, and I will offer it to you.” 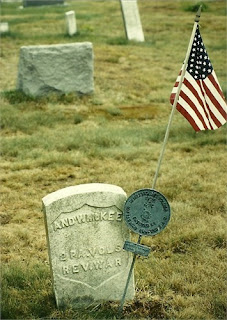 This week’s theme is surprise.  I was surprised last week when I by chance found information about a family in a cluster of families that I have been researching.  So for this week, I had to think about how I could be surprised this week.  Last year I went to the Family History Library in Salt Lake City.  One of the things that I did was download the pension file of Andrew McKee, my 4th great grandfather.  A fellow researcher had been kind enough to send me what she had, but I was interested in seeing the entire file.  I have not looked at the file since I downloaded it.

So I decided to read the entire file and see if there were any surprises in it.  The entire file is 60 pages—I believe I had about 20 to 30 pages that contained the documentation to get the pension for Andrew so there was more to read.  Unfortunately a number of the pages were not legible so I do not know what information I missed.  But there was lot of information.  Some of it I knew.  I was aware that Andrew McKee in 1776 enlisted in Captain Robert’s Company, Colonel Irwin’s Regiment. He was discharged in April 1777.  He re-enlisted in 1780 or 81 for 18 months and served with Captain Zigler’s regiment.  He was at the battle of Three Rivers, and at Saratoga where British General Burgoyne surrendered.   Further, he was present at the surrender of Cornwallis at Yorktown, a battle that ended the Revolutionary War.  For serving to the end of the war, he received a bonus of $80.  He was granted a pension of $8.00 per month.  What I did not realized is that upon his death on June 18, 1835, his children applied for a pension for Andrew’s wife, Mary.  I was amazed at the amount of paper work getting the pension for her required.  Evidently proving two people were married was difficult.

However, there was much more information in the file that did not relate to his war records and was useful in moving my genealogy forward.  Most of the information came from statements made on his behalf by his neighbors.  So what was I surprised to learn?  First, Andrew Mckee and Mary Bamford were married in 1770 near New London Cross Roads in Chester County, Pennsylvania.  Now I know where to begin to look for marriage records.   Second, he settled in Armstrong County, Pennsylvania
in 1799 with his wife and his nine children.  His oldest son, William, moved with his father, but bought his own farm, and did not live with his parents.  Third, my third great grandparents James and Nancy McKee Hannah and their children also moved with Andrew.  I have been looking for the birth records of their son, James Hannah, in Armstrong County so now I know I should look in the Chester County area of Pennsylvania.