Everyone has a hobby or two that they like.  Aside from genealogy, books are another of my  ways to spent time.  I sort books for my local library’s book sale, am a member of two books groups, and always have at least one book that I am reading.  So you can imagine my delight to find out that one of my grandfathers, William Avery, was a bookseller in Boston.

William Avery was born in 1622, in Barkham, Berkshire, England, the son of Christopher and Margery (Stephens), Avery.  William married Margaret Allright.  They, together with their three children:  Mary, William, and Robert, came in 1650 to the Massachusetts Colony and settled in Dedham, Massachusetts.   He and his wife were admitted to the church on February 16, 1650.  He was a sergeant in the Dedham militia as well as the Deputy to the General Court.  He was a member of the Ancient Artillery Company. 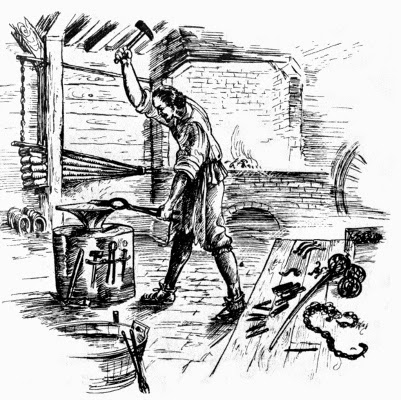 In the Dedham Town records, William’s was granted land to open his forge as a blacksmith; however, later he is referred to as Dr. Avery.  How one goes from being a blacksmith to a physician
to me is a mystery.  However, I think that his description as a physician is correct.  In 1853, Dr. Ebenezer Alden, who was them the President of the Norfolk District Medical Society said “Dr. William Avery was the earliest educated physician, who is known to have taken up his residence in Dedham. “  Further on in the town records, his son, William Avery, Jr. is also described as a blacksmith.  I think that he was a physician who started a blacksmith shop with the intent of turning it over to his son.

Margaret Avery died on September 28, 1678.  Shortly thereafter, William moved to Boston.  Despite his move, in 1680 the Dedham Town Records state  that “Capt. Daniel Fisher and Ensign Fuller report that Dr. William Avery, now of Boston, but formerly of the Dedham Church, out of entire love of  his Church and Town, freely give into their hands, sixty  pounds, for a Latin school, to be ordered by the Selectmen and elders. “ 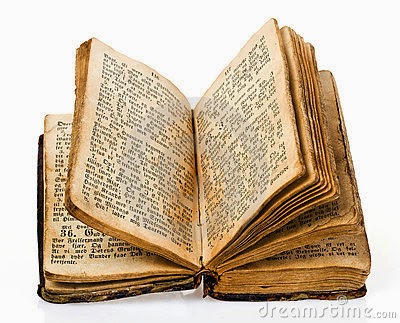 So how did William Avery become a book seller?  Shortly after moving to Boston, William married Maria (Woodmansey) Tappin, whose son was running a bookstore.  William took over the store and added an apothecary department to it.  In 1679 in the History of Printing, the store is described as being near sign of the Blue Anchor.

William died on the 18th of March 1686.  He is buried in the burial ground of King’s Chapel in Boston.  Several years ago I was in Boston, so of course I had to go and visit his grave.  A very helpful Park Ranger (King’s Chapel is a national park) showed me a map of the graves and noted that the headstones had been moved at some point so while he is buried there, he probably is not buried beneath his gravestone.  I had no trouble find the site as it is directly to the right to the gate to the graveyard. 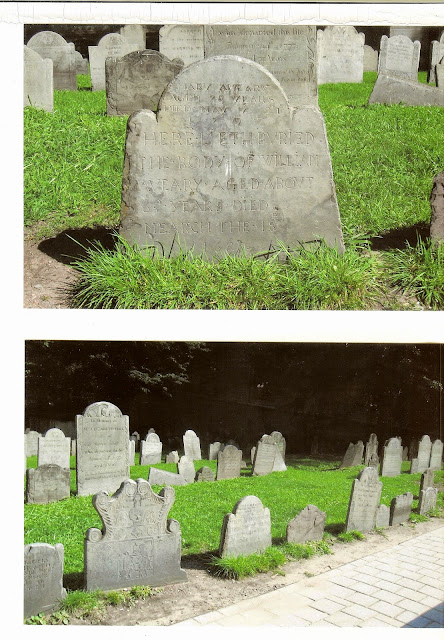 #41--John Wesley Hannah--Applying for a Pension

This is the last installment in my entries about John Wesley Hannah and his service in the Civil War.  After John‘s resignation in 1865 as Captain of Company D of the Illinois 62,  he returned home  to Edgar County, Illinois to take care of his business.  I am not sure when he moved, but by the following year, he was in Butler Missouri.  There, he married Jennie Willie( # 20 Romance in Real Life--Jennie Sophia Willey and John Wesley Hannah), and raised five children.  John built and was the proprietor of the Palace Hotel (# 5—Build Me a Palace—John Wesley Hannah) 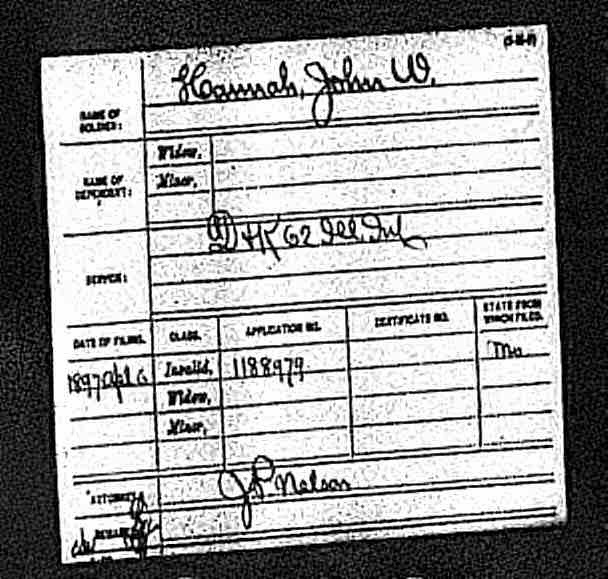 Since he was buried in Oak Hill Cemetery in Butler, I assumed that he lived there until his death.  However, once I received his application for a pension, I discovered that that assumption was not true. His pension request was filed in November of 1897 in St. Sterling, Kentucky where he was living with his oldest daughter, Gertrude Hannah Turner.  On his application, he said that he suffered from rheumatism, heart trouble, paralysis, and general disability.  Those conditions were confirmed, under oath, by his son-in-law and the individual who was taking care of him.  Both individuals indicated that these difficulties were not due to "vicious living."

Initially, the Bureau of Pensions ordered John to appear for a physical exam in Butler, Missouri. That order was appealed because Butler was no longer his home.  Hence, he was examined by three physicians in St. Sterling who concluded that he was “permanently disabled in a degree requiring the regular aid and attention of another attention and is entitled to a pension of $72 a month.”  Further, they concluded that his illness during the Civil War was the cause of his present illnesses.  John lived several more months and died on March 10, 1898 in Mt Sterling.

When I think about the Civil War and the battles, I think about battles in Virginia, Georgia, Pennsylvania, and Maryland.  However, as I followed John Wesley Hannah as a soldier, I found a different part of the war—one that was played out in the west and is known as the Trans-Mississippi Theater.  That theater consisted of the area west of the Mississippi River, including the states of

Missouri, Arkansas, Texas, and part of Louisiana as well as Indiana Territory (Oklahoma).  That is the place that John Wesley Hannah and the Illinois 62 spent two years.
The 62nd remained at LaGrange, Tennessee until August 19.  However, on July 18, John applied for a 20 day leave because of his health.  His application was approved by the camp surgeon, Dr. Cameron, who stated that John has had “bilious remitting fever” for the last four weeks, had to stay in his room, and would benefit from a different environment.  I had no idea what “bilious remitting fever” was, but from several online sources about diseases during the Civil War I learned that it was relapsing fever characterized by vomiting bile and diarrhea.
From August 19 to the 28th, 1863 the 62nd was involved in General Steele’s Campaign against Little Rock, moving first to Memphis, Tennessee, then to Helena, Arkansas, which was held by Union forces.   Believing that attacking Helena would take pressure off Vicksburg, Confederate General Holmes and his troops attacked that town on July 4, 1863.  While the Confederates had more troops and took some fortification, they were repelled by the Union forces, which remained in control of Helena.  This is an important battle in the War, one which I had never heard of, probably because it occurred on the same day as the battle at Gettysburg.
The 62nd was next involved in the battle of Little Rock.   According to the National Park Service Battlefield Protection Program:
On September 10, 1863, Maj. Gen. Fred Steele, Army of Arkansas commander, sent Brig. Gen. John W. Davidson’s cavalry division across the Arkansas River to move on Little Rock, while he took other troops to attack Confederates entrenched on the north side. In his thrust toward Little Rock, Davidson ran into Confederate troops at Bayou Fourche. Aided by Union artillery fire from the north side of the river, Davidson forced them out of their position and sent them fleeing back to Little Rock, which fell to Union troops that evening. Bayou Fourche sealed Little Rock’s fate. The fall of Little Rock further helped to contain the Confederate Trans-Mississippi theater, isolating it from the rest of the South. (http://www.nps.gov/abpp/battles/ar010a.htm) 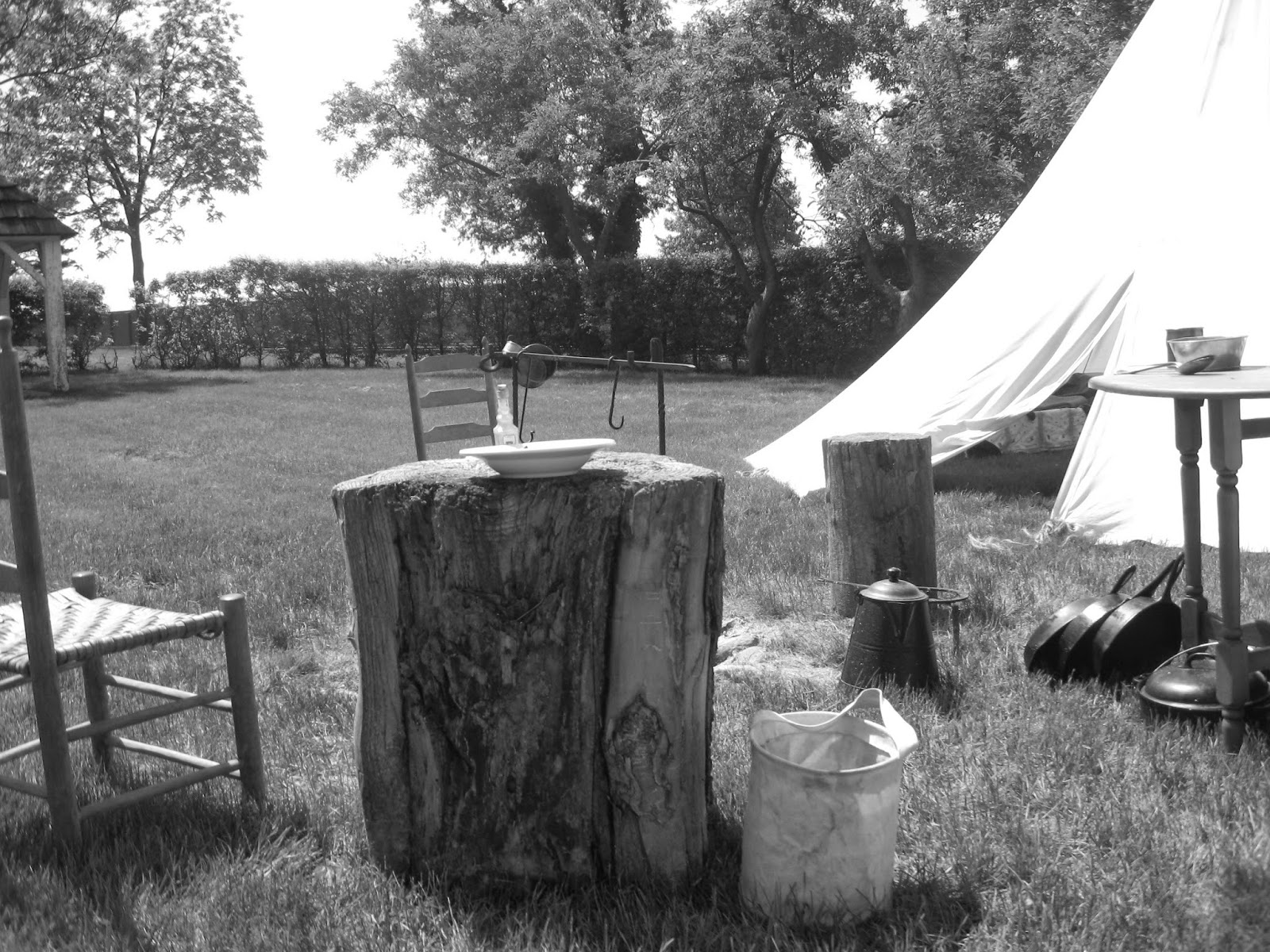 The 62nd remained at Little Rock.  From his muster roll, it appears that John was the commanding officer of Company K from October 22 to December 22 as he was he entitled extra pay for those duties.  On January 9, 1864 John along with the other soldiers re-enlisted as a veteran organization.  On April 25, 1964, the 62nd moved to Pine Bluff Arkansas.  On August 31, 1864, John Wesley mustered out as a 1st Lieutenant, was promoted to Captain and became commander of Company K.  On August 12, 1864, John along with the other veteran soldiers returned to Illinois for a veteran furlough.  The furlough lasted until November 25, 1864, when he returned to Pine Bluff.
On February 5, 1865, John was detached from duty to serve as the Provost Marshall in Pine Bluff.  I was not sure what exact a provost marshal did, but the following explanation from Family Search (https://familysearch.org/learn/wiki/en/Union_Provost_Marshals%27_File) was extremely helpful:

The provost marshals who served in territorial commands, armies, and Army corps were the military police. They sought out and arrested deserters, Confederate spies, and civilians suspected of disloyalty. They also investigated the theft of Government property, controlled the passage of civilians in military zones and those using Government transportation, confined prisoners and maintained records of paroles and oaths allegiance,

John continued as Provost Marfshall through June of 1865.

In April, 1865, the men who were not veterans were ordered back to Illinois for mustering out.  Those that remained were consolidated into seven companies.  John Wesley became to Captain of the new Company D and also continued as Provost Marshall.  On July 8, 1865 the 62nd became part of Brigadier General Bussey’s command at Fort Gibson, Cherokee Nation in Indian Territory.
On September 14, 1865 John Wesley resigned as Captain of Company D, 62nd Illinois.  He gave two reasons:  one that he has served for four years in the regiment, and second that his business at home required his immediate attention.  He also indicated he had been paid through April 30, 1865, had returned all the property owned by the government, and that he did not owe the Government any money.  He also stated that at the time of his resignation the company consisted of the following:  3 Commissioned Officers and 88 enlisted men.


I am not sure exactly why John resigned.  Since he referred to personal business, I am assuming he is referring to his father’s death which occurred in 1865.  Therefore, he needed to return to his home in Edgar County, Illinois to deal with his father’s affairs and the farm.
Posted by Mary at 8:00 AM No comments: