#63—Nancy McKee—Where Are You Buried?


This week's theme is about buildings.  I have blogged about the Fairbanks House (Jonathan Fairbanks--Building his Family a House) and about the Palace Hotel (Building Me a Palace--John Wesley Hannah, so I had pretty well exhausted that theme.  So I looked for other ideas.  Several blogs suggested that Tuesday should be Tombstone Tuesday, so I decided to go that route. 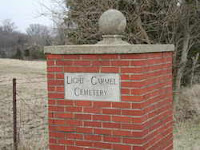 Now that it is summer in the Midwest, it is a great time to take a trip.  One of the first genealogy trips I took was to Edgar County, Illinois.  I had just started my genealogical research and was anxious to find out more about my Hannah relatives.  Among the things I wanted to do was to visit the various cemeteries and see and photograph the graves.  The Edgar County Genealogical Society had a listing people’s graves and the cemeteries they were in.  Most of my ancestors were buried in the large cemetery in Paris, Edgar County.  However, Nancy Mckee was buried in the Mount Carmel Cemetery, sometimes known as Light Carmel Cemetery, in the Brouiletts Creek township of Edgar County.  Nancy McKee (1773-1846), is my great, great grandmother, daughter of Andrew and Mary (Bamford) McKee, and wife of James Hannah.

So the first thing I needed to do was figure out how to get from Paris, Illinois where the Edgar County Genealogy Society and Library was to the Light Carmel Cemetery.  Fortunately, the volunteers at the library were able to not only give me directions, but also draw my route out on a map.  So armed with my map and a camera, I set off in my car and drove up US 150 for about 10 miles to a right turn on 1960 north.  Then I drove 3 miles to a left turn on 1900 Street.  Having been told I could not miss the cemetery as it was just a little way down the road, of course, I drove right by it and had to back track. 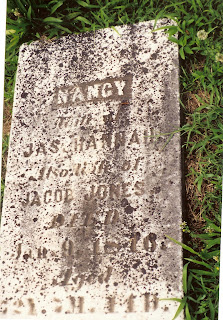 Once out of the car and in the cemetery, I had a sudden realization that while I knew that Nancy McKee was buried here, I did not know exactly where and the listing of graves did not give any location.  So, there was only one thing to do—start walking up and down each row in the cemetery
and read each grave stone.  After about ten minutes of looking, I found her gravestone.  It had fallen over—fortunately, it had fallen with the writing facing up.  While somewhat difficult to read, the following is on her gravestone:  “Wife of James Hannah, also 2nd wife of Jacob Jones. 72 years, 7 months, 14 days.”  Next to her grave is the grave of her second husband, Jacob Jones. 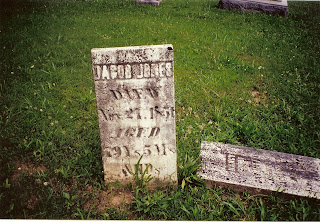