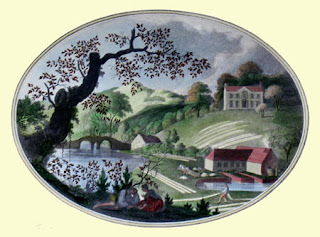 This week’s theme is family legends.  All families have legends about their ancestors.  Some involved being related to royalty or famous people, others involve having the family name changed at Ellis Island, while still other might involve ancestors who came over on the Mayflower.  Most family legends may have a little truth in them.

In my family the legend involved the reason that James Hannah (1772--1828), my emigrant ancestor,  came to the United States in the late 1700’s.  As the story goes, James, a younger son,  came from a well-to-do family in Derry Ireland.  The family owned a Bleaching Green.  These were large grassy areas where linen cloth would be laid to be bleached by the sun.  James evidently fell in love with one of the family maids, who of course is always described as pretty.  This was totally unacceptable to James's  parents, who beat him so he fled to the port and sailed to the United States, probably landing in Philadelphia.

That is a nice story, some of it may be true.  From my research, I am pretty sure that the Hannahs did indeed own a bleaching green.  Bleaching Greens were very common in that part of Ireland.  I have a letter in which a cousin describes going to Ireland, meeting with the Hannahs, and seeing the bleaching green.

Now did James fall in love with the maid and flee.  Maybe, but probably not.  I think if he had loved her, he probably would have married her and brought her to the States with him.  I think that being a younger son, he did not see much future for him in Derry, so he decided to migrate.  However, it is a nice story.

I have not been able to trace the origin of that story so if I could talk to James Hannah, I definitely would ask him why he left Ireland and came to the United States.