Oldest?  Oldest ancestor?  Oldest document?  Oldest brick wall?  Oldest picture?  All were possibilities for this week’s theme, but the one I liked the most was my oldest picture.  I inherited some very old tintypes of my ancestors.

If you have seen tintypes, you may know that the people look very stiff and formal and no one ever smiles.  That is because it took about a minute to get the image onto the iron plate (Yes, they are called tin types, but they are actually on sheets of iron.) and no one can smile for that length of time and not move their mouth.  Any movement will lead to a blurry image.  That is why they are stiff and unsmiling. 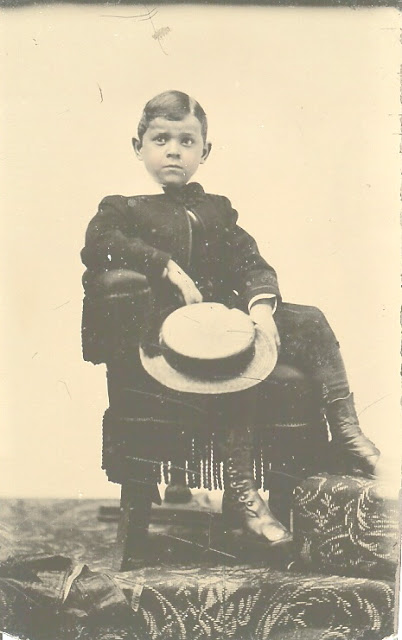 This is  William Fisher Richards, my great great uncle. He was born in 1879 so I am guessing he is about 6 or 7 in this picture.  There are many things I like about his picture.  The way his hair is parted, his big eyes, the hat that he is holding in this hands, and the fact that only one of his feet is on the floor.  The chair he is sitting in is pretty impressive, too.  That is a whole lot of fringe on the bottom!

I would love to know where it was taken, what if anything, he remembers about going to the "tintypists," how hard it was not to move, and if he ever wore that hat.