#131--John Eliot, Apostle to the Indians 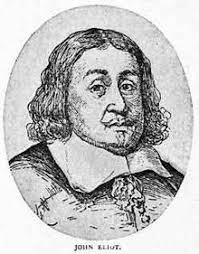 The theme for this week is Chapel.  It could be a place or a person who worked in a church.  From my ancestors I chose John Eliot, a minister, who was also known as the Apostle to the Indians.  He is my 8th great uncle.  He was born in 1604 in Widford, England to Bennett and Lettice (Alger) Elliott. John received a degree from Jesus College in 1622 in Cambridge, and then worked with Thomas Hooker at his Puritan academy.  Eliot came to Boston, MA. In 1631 and then moved to Roxbury, MA.  John Eliot married Hanna Mumford. They had six children, five sons and one daughter.

For almost 60 years, John Eliot was the pastor of the Puritan church at Roxbury, Massachusetts.  He established the Roxbury Latin School in 1645 and served as an Overseer of Harvard College from 1642 to 1685.

His most notable achievement was his mission to the local Indians.  In 1646 he began to preach to them, first in English and later in their own language, Algonkian.  He translated the bible into Algonkian and its publication was the first printing of a bible in North America.  Eliot also established 14 towns for the Indian where they would be able to follow their own culture and laws.  At the same time, John taught several Indians to be missionaries.