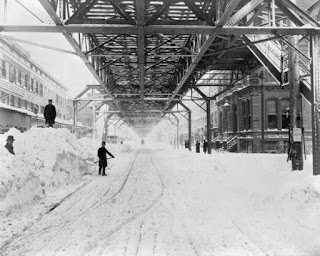 This week’s theme is storms.  Two years ago, I blogged about the Blizzard of 1888 in New York City.  So I decided to go back this week and re-visit that blizzard.  For that blog, I used the New York Times as my source for information.
As I wrote then, “The storm started as rain on March 12, 1888, but the temperature dropped during the night, heavy snow fell and the winds increased to 50 miles an hour.  While the measured snow fall was 21 inches, the winds created very large drifts, in some cases reaching to the second floor of houses.”  The city came to a total halt; 200 people died during the blizzard, either my freezing to death or being killed by falling objects and electric wires.

Since my great grandfather, Abiathar Richards and his family, lived in Brooklyn, I wanted to look at that blizzard from the perspective of Brooklyn.  The Brooklyn Daily Eagle wrote about the blizzard on both March 13 and 14.  Obviously, the paper focused much more on what happened in Brooklyn and how its residents were affected.

First, the river froze, which prevented the ferries from running between Brooklyn and lower Manhattan. 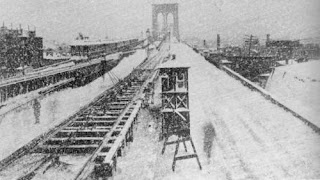 To further complicate things, the Brooklyn Bridge was so deep in snow that it became impassible.  Consequently, many Brooklyn residents, who commuted to Manhattan in the morning of March 13,  were stuck in Manhattan and unable to get home. 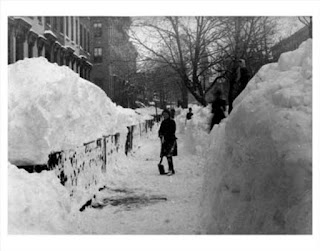 Second, there was so much snow that people could not walk down the sidewalks or use their carriages on the streets.  The newspaper urged people to shovel their sidewalks themselves or hire men to do so. 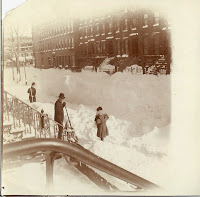 I have this photograph of Fort Greene Place where the Richards's lived and been impressed with the amount of snow on that street.
Third, the paper wrote about how many things which are delivered, e.g. milk, coal, etc. were stopped by the storm.  However, I was amused  to see that the paper was very clear that even if not delivered, the paper was written and printed.

I would really like to be able to talk to my grandfather about his experiences during the blizzard.  First, I would want to know who is in that picture.  Is it his daughter, Gertrude and his two sons, Chester and Bill? Are they shoveling the snow?  If not, who did shovel it? I would also like to know whether they were trapped in the house, and, whether Abiathar tried to go to work in Manhattan.