I have blogged before (#14--Mail for you--Chester Richards) about my collection of old postcards.  Some of them are over 100 years old, they have been sent to my great grandmother, grandmother, parents, and me.  Others have been purchased; before the days of digital photography, you were never knew whether or not the pictures you took would come out.  So those postcards were a backup to the photographs.

Since it is summer and people are traveling, I thought I would blog again about some of my old postcards.  I never realized the amount of  genealogical information that you could get from a 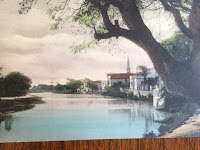 My great uncle Chester (Chet)  Ingersol Richards was a great traveler and sender of postcards.  I have cards that he to his mother, Mary Jane Cochrane Richards, his brother, William F. Richards,his sister, Gertrude Richards Hannah and other relatives.   From city directories I knew where they lived, but the postcards gave me additional information.  For example I found that in 1905 Mary Jane Richards was visiting her daughter, Gertrude, in Auburn, because the card was sent to Gertrude’s husband’s office.  Chet and his brother, Will, were business partners.  I learned the address of that business because he always wrote his brother at their business address— 59-61 Reade Street, NYC.

Unfortunately, Chet was not a great correspondent.  All of the postcards below have pretty much the same message.  "Leave tomorrow....Much love, Chet."

This card he sent to his aunt, Emily Cochrane in March of 1908 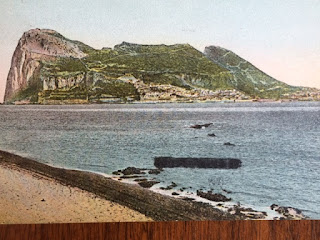 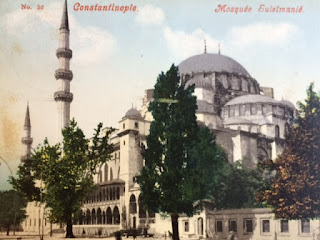 His brother, William Fisher Richards received this card from Switzerland.  Unfortunately the date is not readable. 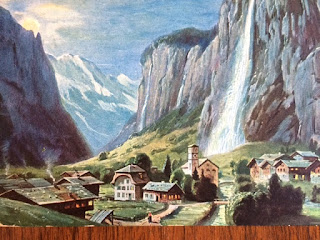 Now I love to travel so I would really like to have a long conversation with Uncle Chet.  I would want to know where his favorite places were, what he liked to do on his travels, what steamships he took, and what advice he would give me about traveling.  I would also be interested in his reaction to learning that now we can fly to Europe from the United States in less than 7 hours.