#74 Seth Richards--A Man of Many Occupations

Last week I blogged about Silvanius Richards.  While reading about him, I became interested in his son, Seth.  I knew of Seth Richards because my great grandfather, Abiathar Richards is listed as living with him and his wife, Fanny, in the 1850 census.  However, I have really never taken the time to research Seth.  So now is that time.

According to the History of Newport, New Hampshire, from 1766 to 1878 by Edmund Wheeler, Seth Richards was born on February 20, 1792 to Sylvanius and Lucy Richardson in Newport, New Hampshire.  Early in his life, Seth engaged in a variety of occupations:  first, he was a farmer, and hotel keeper in the west part of Newport.  Later he moved into Newport and ran  the Rising Sun hotel with his father.

After his stint at the hotel, He became a clerk in Eratus Baldwin’s store.  He must have learned a lot and liked selling as in 1835 he bought the stock and store from the Cheneys.  He and his sons kept that store and ran it until 1853.  Leaving the retail trade, Seth with his son, Dexter became a manufacturer.  They produced  flannel material at the Sugar River Mills. 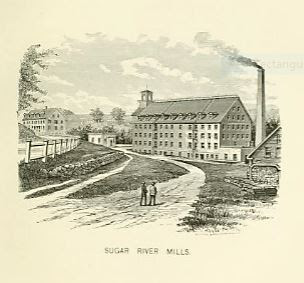 Seth was not only a business man, he also was active in the affairs of Newport.  He was a selectman, a state representative and post master.  In addition, he was a Captain in the town militia.

If I could talk to Seth, I would like to ask him about why and how long Abiathar Richards, his wife’s nephew lived with them and why.  Was he visiting for a while?  Was he there to work in the store and learn the retail trade?  I do know that in the 1860 census, Abiathar is living with his brother, Abner, in Brooklyn, New York and that he worked in the wholesale shoe business.  Did he learn some of those skills from Seth Richards?  So many questions, so few answers.