Last year I responded to the Ancestry.com challenge to blog about one of my ancestors once a week. I did not quite make it to 52 ancestors, however, I learned a great deal about those I researched and had fun doing it.  This year, the challenge has changed to a weekly suggested theme, which I can focus on or not.  I am going to try to use the themes.

The theme for the first week is “having a fresh start.”  I think that anyone who moves to a new country or state is having a fresh start so I have a number of ancestors that got a fresh start.  My first impulse was to blog about James Hannah and how he came to Pennsylvania from Ireland.  Then I remember that I had blogged about him and what I wrote seemed pretty close to a fresh start  (See #27--JAMES HANNAH—Many Questions and few Answers) so I decided to try someone else.
Abraham Newell is my fresh start ancestor.  Abraham was born in England about 1584.  He came to Massachusetts on the ship Francis, arriving on April 24, 1634 with his wife, Frances and his children. Abraham, Sr. and his family settled in Roxbury, Massachusetts.

William Stark Newell in his books—The Ancestors of William Stark Newell—speculates as to the reasons that Abraham may have immigrated.  One speculation is that he came for religious reasons.   In England, the Puritans wanted to reform the Anglican Church and remove many of the practices left over from the Catholic Church, e.g., stained glass, statues, etc.  For those beliefs, Puritans were persecuted and as a result, came to the Colonies to worship as they wished to.  To support the idea that Abraham was a religious person and may have come for religious freedom, one need only look at the names of his children—Faith, Grace, Abraham, Jr., John, Isaac, and Jacob.  They are all biblical.  Second, Abraham joined the church in Roxbury the same year that 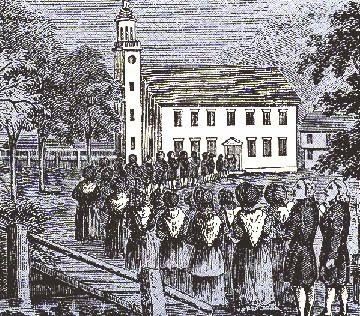 he arrived.  Thus, there is some reason to believe that Abraham may indeed have decided to move his family to Massachusetts for religious reasons.

Economic factors were another reason that individuals migrated.  Land in England was scare and inflation was high, making earning a decent living difficult.  If people moved to the Colonies, their chances for a better life improved. I have read that Abraham was a tailor.  At the time of his immigration, the wool trade in England was experiencing great inflation and wool was scarce.  Lack of cloth would have impacted a tailor’s ability to make a living.   Further, I do not know whether or not Abraham owned any land in England.  However, in the Colonies, land was free and with land ownership came the right to become a freeman and vote.  In Roxbury, he did own land.  The Roxbury Book of Possessions, dated about 1653 lists ten parcels of land that he owned.  If I add up the acres in them, Abraham owned 119 acres of land in various places in Roxbury.  Using his will, from 1692, William Start Newell estimated that he had 153 acres plus some land in fresh meadows.  So it is also possible that Abraham Newell, Sr. came to the colonies for economic reasons.

It is not possible to know exactly why Abraham, Sr. came to the Colonies, however, both religious and economic reasons seems possible.  However, it looks to me that he got a fresh start—he could worship in a Puritan church and he owned land.  If I could talk to him, I surely would ask why exactly he decided to come.