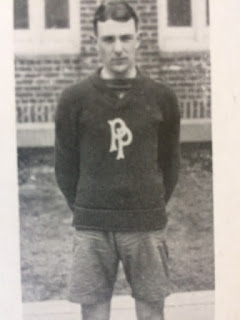 Sports--I was really pleased to see that this week's theme was sports.  I come from a family that is pretty athletic and was involved in lots of different sports--golf, swimming, tennis, sailing, basketball, etc.  So it was a little hard for me to figure out how I was going to tackle this theme.  Remember, that I come from a family that does not throw out things that have sentimental value and sitting right in my family room was my father's lacrosse stick.  What a great thing to write about.

In high school, my father played both lacrosse and hockey.  When he went to college he focused on lacrosse.  Lacrosse was originally played by Native Americans.  The game involves ten players whose goal is to put a small rubber ball in their opponents net by using a long handled stick with a pocket at the end.  No hands are allowed to touch the ball.


My father was captain of his freshmen lacrosse team.  In this picture, he is the one in the middle holding the lacrosse stick.

After his freshman year, he played on the varsity lacrosse team.  In 1926, he was elected to the third All American Lacrosse Team.

I wish I had asked more questions about his playing lacrosse--who they played, were his friends of the team, how often did they win.