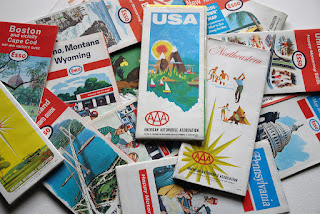 This week’s theme is travel.  I have blogged about Chet Richards’s trips and the postcards , he sent to his family in the early 1900’s.  So when I saw the theme, I immediately thought of my postcards.  When I looked through them, I realized I had a number of them that my mother’s cousin, Jean Roberts had sent to her.

Cousin Jean was born 21 Sep 1906 Kings, New York, USA  Her parents were William Alexander and Christina (Minarcik) Roberts.  For her entire life, she was a Broklynite, until her death in May of 1977.

Cousin Jean loved to travel through New England.  In the Spring, she liked to see the flowers and in the Fall, the leaves turning different colors.  A dedicated “birder,” any time she traveled she looked for birds.  Cousin Jean had a novel way of deciding when to take her trips through New York so she would not miss what she wanted to see.  She worked in Brooklyn in one of the probation offices.  In that office, newly released prisoners needed to check in.  She always asked those coming from upstate New York about the condition of the trees and flowers!

Here are a couple of the postcards, she sent to my mother.

This is one from Bangall, New York:  She wrote:

"Hi—I lived up to my reputation as being a drought-breaker—much rain and snow flurries predicted for today.  Have been getting good food and rest.  On Wednesday drove through an apple orchard on the way to Germantown.  I doubt I will continue to New Hampshire as I think there will be little in bloom up there with this weather." 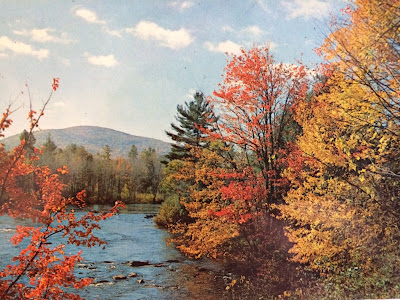 Jean also liked to go to New Hampshire;  here is a card from Clarksville, where it seems all did not go well in the car department:

"This is one of my favorite views at or back at the White Mountains…Leaves just appearing and was like winter when I arrived.  Right now the proprietor is changing a flat tire for me." 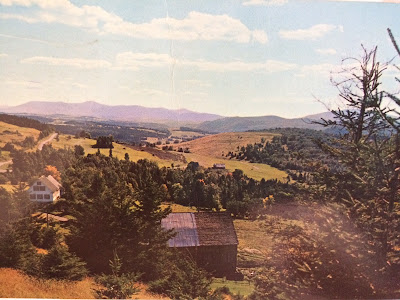 And another from Connecticut Lake, New Hampshire:

"Finally reached my favorite birding spot near the Canadian Border.  Very crowded with fisherman for Memorial Weekend.  I was fortunate to get a cottage.  Was very cold until Saturday and much snow still in the woods and on shady roads.  I will probably take a slow route home via Maine.  From my cottage I can see Maine Mountains." 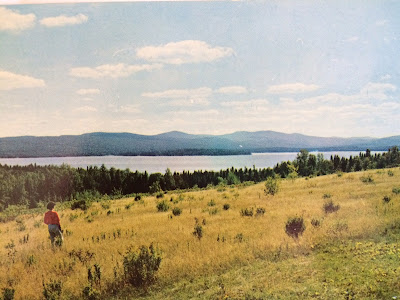 I wish I had asked Cousin Jean more about her trips.  It would be fun to know what was the most exciting things that happened, what places she did not like, if she was anxious about traveling along and if she had any experiences that could be considered dangerous.
Posted by Mary at 4:52 AM