Everyone is pretty familiar with the census schedules that deal with people and describe their characteristics, but there are other schedules-- agriculture, industry, manufactures, or 1890 Union veterans. The Agricultural Schedule describes the farms and their products.   I like the agricultural schedules as they give you a picture of how the person made a living.

Previously, I blogged about Sarah Hannah and her farm (#18—Sarah Hannah—Farming on her Own and #12 John M. Hannah—The Farmer not in the Dell, but in Illinois).  So this week I am blogging about George Newell Hannah and the 1860 Agriculture Census Schedule. 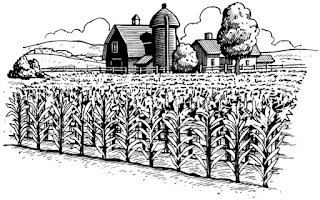 I found George Newell Hannah in the 1860 Agricultural Census in Prairie Township in Edgar County, Illinois.  According to the Schedule, he owned 180 improved acres of land and 7 unimproved, with a value of $1700.  The equipment needed to run the farm was worth $50.  In terms of livestock, George owned 2 horses, 2 mulch cows, 45 other cattle, and 301 sheep.  The farm produced 3000 bushels of wheat, 100 bushels of rye, and a ton of hay.  Also produced was 100 pounds of butter, 60 gallons of molasses, and $50 worth of slaughtered animals.

Unfortunately, The Agricultural schedules for 1870 and 1880 are not available for George.  However, it appears that George farmed his entire life.  The 1870 census lists him in Edgar County with farmer as his occupation while the 1880 census has George as a farmer, but now living in Bates County, Missouri where his brother, John Wesley lived and ran the Palace Hotel.  By 1900 he was living in Hampden, Coffey, Kansas.