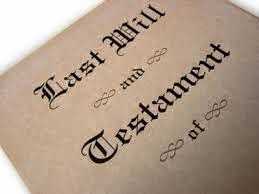 Last week’s theme was Where There’s a Will…, this week’s theme is “There’s a Way.  For this week, I decided to put them together and blog about how a will showed me the way to find out where my great, great aunts and uncles lived.

Then, on Family Search I discovered that wills from Kings County, New York had been digitized.  I was able to find my great great- aunt Emily Cochrane’s will.  As I read her will,
I learned that when William Cochrane died in testate, her siblings agreed that Aunt Emily should receive the house at 124
Fort Greene Place, Brooklyn, to either live in or sell.  However, upon her death, the house should be sold and the proceeds split equally between her siblings or their heirs.

If she had sold the house because she needed the money to live on, the remaining funds would be split.  According to a petition filed with the court by her sister, Blanche Jewell, Aunt Emily died at the house on Fort Greene Place and the value of her estate was not greater than $2,400.  Now that was interesting to me as I did not know much of the history of that house, but what was much more interesting was the listing of all her siblings or their descendants and their addresses.

The two individuals that had been most puzzling to me were Emma and her husband Chester Mallory and George A. Cochrane.  I was pretty sure that they were not in Brooklyn, even though the Mallorys were buried in Green-Wood Cemetery in Brooklyn.  The will supplied the answer.  The Mallorys had moved to Illinois and were living in Chicago with two daughters, Katherine and Florence. George A. Cochrane was living in Woburn, Massachusetts with his wife, Ella Brinkerhoff Cochrane and their three children:  Grace, Charles and Ella.  Once I had their locations, I was able to locate a variety of other information for them, such as the census, death records, etc.

So you see, when you have a will, there may be a way to get more information.
Posted by Mary at 8:38 AM