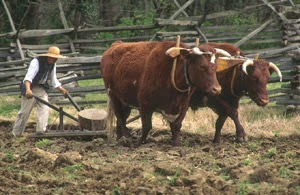 John M. Hannah, my 2nd great grandfather fought in the Civil War (See Blog# 2—John M. Hannah—Why did you lie about your age?).  However, he spent most of his life as a farmer in Edgar County, Illinois.  Now I grew up in New York City, what I know about farming in this day and age is minimal.  What I know about farming in the mid1800’s is just about non-existent.
Illinois Public Domain Land Tract Sales are on line and easily searchable by name.  John purchased land 11 times from 1844 to 1851.  The land was located in Township 16 North and Ranges 12 and 11.  In total he bought 661.15 acres.  Some of the land was bought with military land warrants, which he had purchased from the holders and the rest was purchased at $1.25 per acre.  The site has directions about how to find the exact location of the land.  I did that and found that the land was located in the northeastern part of the county, near the current town of Chrisman in both Ross and Prairie Townships.  The coordinates for each purchase can be put into Google Early, which I did, so I was able to virtually view his farmland.  He also, according to the books in the Courthouse in Edgar County, purchased land privately in the same areas.
So now I knew where the land was, but not what he did with that land.  Ancestry.com has the U.S. Federal Census Non-Population Schedules for 1850 containing information about the land, animals and produce.  On his farm, John had 150 improved acres and 200 unimproved acres.  The land was valued at $2500 and the equipment at $500.  His livestock included 8 horses, 2 milch cows, 12 working oxen, 40 other cattle, 6 sheep, and 70 swine for a value of $1266.  The farm produced 30 bushels of wheat, 3000 bushels of Indian corn, 150 bushed of oats, 2 bushels of peas and beans, 6 bushels of Irish potatoes, $5 worth of produce from orchards, 120 pounds of butter, 2 tons of hay, and $25 for slaughtered animals.
I know a lot more now about John M. Hannah and his farm, but I still have question.  He had a lot of land.  I would like to ask:  The farm was 350 acres, how did you use the rest of it.  I know you sold some and gave some to your children, but what about the rest?  Did you rent it out, just leave it, what?  What did you do with what you grew?  Sell it?  If so where and who bought it?
Illinois Public Tract Land Sales (https://www.cyberdriveillinois.com/departments/archives/databases/data_lan.html)--also in Ancestry.com