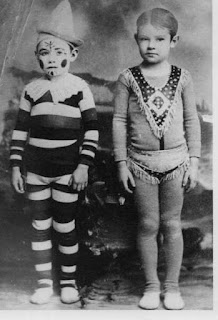 Their father, James Willey  (1850-1918) changed his name to Signor Montanio.  James worked as an acrobat, tight- rope walker, and a trapeze  artist. He also ran circuses--primarily, the Great New York Circus and the Great Mexican Circus.   He married Josephine Greenwalk (1860--1899), and they had four children--Harry (1873-1947), Perry (1880-1942), Minnie, and Charlotte.  The boys worked in the shows as clowns and acrobats and their mother had a musical act.

Local newspapers often reported that the circus was coming or reported on the performance.  Those clippings gave me some insight into what the boys did. According to this article, sometimes they worked as acrobats or trapeze artists.

At other times, they did sketches. 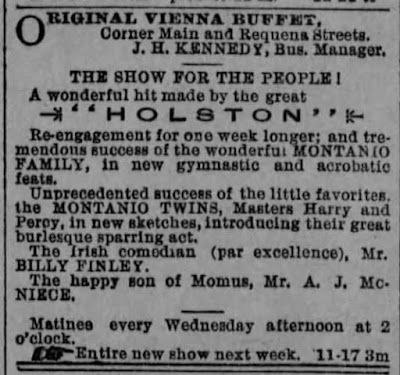 While the article above describes them as twins, they were not.

I wonder what Harry and Perry looked like and was thrilled to find these two pictures of them.

From tracking the route of their circus--The Great New York Show or the Great Mexican Show, the boys worked until 1893.  After that, various newspaper articles show them working as cowboys, often in rodeos.

I would love to talk to them and find out exactly what they did, what it was like to travel with a circus, and their lives as cowboys.
Posted by Mary at 6:38 AM