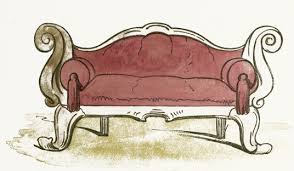 When working on my family tree, I am always so delighted when I find something out purely by accident, and even more delighted when it clarified or adds to what I know. I had that happen last week.  I was searching on the Brooklyn Historic Society’s webpage and noticed that online they had a newspaper entitled the Brooklyn Evening Star, a paper I had never heard of. Since it was searchable, I tried a couple of names from my Richards line with no results.  Then I switched to my Cochrane line, using William Cochrane. 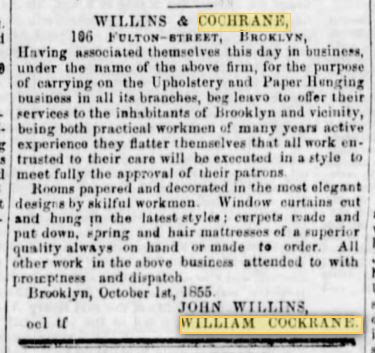 William Cochrane is my great great grandfather. He was born in London England in 1810 and came to the United States about 1833 or 34. Originally he and his family settled in Buffalo, New York, and then Rochester, New York. Sometime in the 1850’s, he moved his family to Brooklyn. The census for 1840 and 1850 listed his occupation as upholster. So I thought I understood what he did—he put material on furniture.  That is, until I saw the search results from the Brooklyn Evening Star.  I found  two different ads. 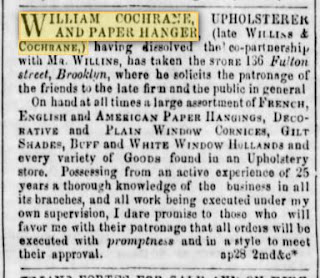 The one from 1855 states that he and John Willens were in business together at 106 Fulton Street, Brooklyn.  They offered a variety of services:  upholstery, rug cutting, paper hanging, curtain and drapery making as well as mattresses. The second ad from 1857 shows that William Cochrane was now in business for himself. He offered the same services, but indicated that all the work was done under his supervision.  So I assume that he had men working for him.

Being a curious person, I googled the word upholsterer and learned that in England in the 1700 and 1800’s, upholsterers often were in charge of decorating entire rooms, not covering the furniture. That certainly fits with his advertisements I found.

Several years ago, my cousin, Alice, gave me pictures of William Cochrane’s living room on Fort Greene Place, in Brooklyn.  Thanks to Photoshop Elements, I was able to lighted them up and was better able to see all the details. 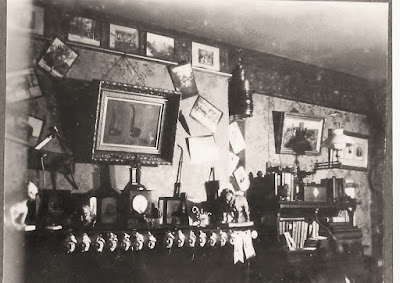 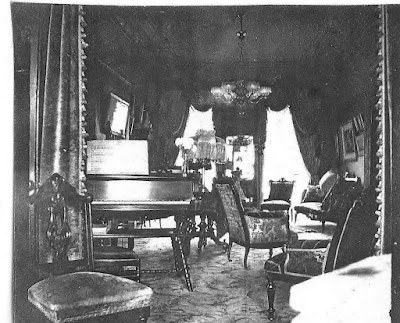 If I were able to talk to William Cochrane about his work, I would want to ask how he learned to be an interior decorator, what was his favorite decorating style, and why decided to move his business to Brooklyn.