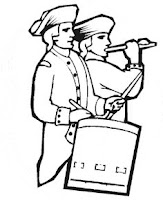 This last Saturday was the Fourth of July.  As usual, I went to Celebrate America at Greenfield Village, part of The Henry Ford.  A fife and drum corps marched and that reminded me that I had several ancestors that fought in the Revolutionary War.  I used Abiathar Richards, Jr. (#10--Like Father, Like Son—Abiathar Richards, Jr. )  as my Revolutionary War ancestor to join the Daughters of the American Revolution.   I know that I can file supplemental applications on ancestors who also fought in the Revolutionary War.  I want to do that, so this week I am blogging about one of them—Ebenezer Smith.  Doing so will force me to organize the information that I need for the application.

Ebenezer Smith is my  4th great grandfather, and the father of Elizabeth Smith, Abiathar Richards, Jr.’s wife.  Ebenezer was born in Dedham, Massachusetts of November 8, 1719 to Joseph Smith and Susanna Fisher.  He married Lydia Hartshorn on September 5, 1745.

According to Massachusetts Soldiers and Sailors in 4th the Revolutionary War, Ebenezer Smith served as a minute man in Captain Guild’s company, which was in Colonel Greaton’s regiment.  He served 13 days beginning on April 17, 1775.

I tried to locate him in the census and could not pin down which Ebenezer Smith he was.  There is one in Dedham, Massachusetts, one in Dover, and one in Roxbury, which are the towns next to Dedham.  Each has 6 people in the household.  I believe my Ebenezer is the one in Dover as the biography of Frank Smith in American Ancestors indicates that Ebenezer Smith, whose wife was Lydia, was a farmer in Dover.

Other than a statement in the DAR records that Ebenezer died on December 4, 1798 I can find no official record of his death and burial or that of his wife.


If I could talk to him, I most definitely would ask where he and his wife were buried.  I also would like to know what his life was like—what did he do for work, for recreation, and what it was like to become independent from England.